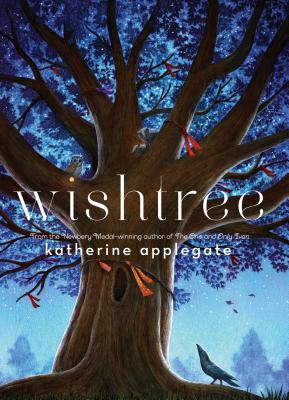 By Katherine Applegate
Please email or write store for pricing and availability information.
Special Request - May Not Be Available

Narrated by an ancient oak tree named Red who watches over the neighborhood and extends his branches every year for people to hang wishes on them. When a new family moves into the neighborhood, not everyone is welcoming. Samar befriends a local boy under the tree and together with hope -- and unknowingly, Red, they seek to make things okay for Samar and her family. Wishtree is the story of kindness and hope. A cast of animal characters bring this story to life. A timely, important and very accessible book. A small book with a big heart. Perfect for One Book, One School programs and book clubs. -- Kristen Gilligan, owner

Wishtree by Katherine Applegate is another sweet story by this author of The One and Only Ivan. Narrated by a tree, this clever book tells of the happenings in a neighborhood. The tree's neutral point of view lets the reader decipher and judge the story as it unfolds. A very short read, but with a very positive message of hope. Would be a great read aloud for a classroom.

Red is an oak tree who is many rings old. Red is the neighborhood wishtree ? - people write their wishes on pieces of cloth and tie them to Red (TM)s branches. Along with her crow friend Bongo and other animals who seek refuge in Red (TM)s hollows this wishtree ? watches over the neighborhood. You might say Red has seen it all. Until a new family moves in. Not everyone is welcoming and Red (TM)s experiences as a wishtree are more important than ever. Funny deep warm and nuanced Wishtree is Katherine Applegate at her very best writing from the heart.