On the Way to the Web: The Secret History of the Internet and Its Founders (Hardcover) 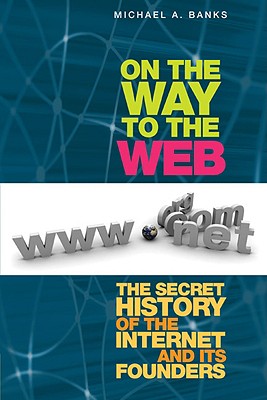 On the Way to the Web: The Secret History of the Internet and Its Founders (Hardcover)

On the Way to the Web is the story of the opening of the Internet, and parallel developments in the alternate world of computer bulletin board systems. It's a chronicle of the inventive, individualistic and often cantankerous individuals who set the Internet free--and the online population who created a new culture and turned the frontier into their vision of the future. On the Way to the Web is a business book and a chronicle of popular culture set in the online era preceding the Web, with a rich vein of human interest.

The author, Michael Banks' current best seller, CROSLEY: The Story of Two Brothers and the Business Empire that Transformed the Nation (Clerisy, 2006) was on the NY Times best seller list thanks to Banks tireless signings and promotion activities. He has several best selling books including The Modem Reference, which is the only self-published computer book to sell more than 200,000 copies. Michael will be aggressive in his promotions on this book.

Michael A. Banks is the author of more than 40 books, among them several titles that deal with Internet topics, including The eBay Survival Guide; Web Psychos, Stalkers, and Pranksters; The Modem Reference; PC Confidential; and Welcome to CompuServe. He is coauthor of CROSLEY: The Story of Two Brothers and the Business Empire that Transformed the Nation (Clerisy, 2006), the biography of twentieth-century industrialist/entrepreneur and communications magnate Powel Crosley, Jr. (This book made the New York Times extended bestseller list, the Wall Street Journal hardcover business book bestseller list, and the Business Week bestseller list. Having sold 45,000 copies during its first three months of existence, it received a full-page writeup in the February 12, 2007, issue of Publishers Weekly.) He has written hundreds of magazine articles and served as a contributing editor and columnist for Computer Shopper, Windows, and other magazines. Banks has been online since 1979, when he caught his first glimpse of CompuServe. During the 1980s, he was involved in a number of Internet firsts, including online book promotion. He has helped maintain bulletin board systems, was a special interest group (SIG) manager on DELPHI for a number of years, and worked in a consulting capacity for CompuServe and The Source. He wrote one of the first guides to online services, The Modem Reference (Brady/Simon & Schuster), which introduced hundreds of thousands of users to modems and the online world. Because of his reputation as a modem and telecommunications expert, GEnie and BIX (Byte Information Exchange) created special online forums for Banks early blogs. He has also advised a number of businesses in the area of online marketing.