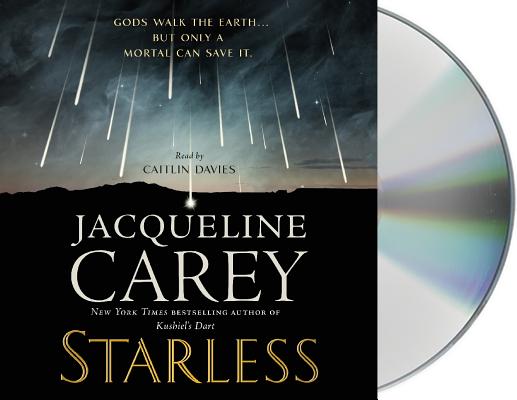 By Jacqueline Carey, Caitlin Davies (Read by)
Please email or write store for pricing and availability information.
Special Request - May Not Be Available

"Jacqueline Carey's writing flows so beautifully that her stories beg to be experienced on audio...Listeners looking for something different will appreciate this unconventional stand-alone." — AudioFile Magazine

Jacqueline Carey is back with an amazing adventure not seen since her New York Times bestselling Kushiel's Legacy series. Lush and sensual, Starless introduces listeners to an epic world where exiled gods live among humans, and a hero whose journey will resonate long after the last chapter concludes.

Caitlin Davies is a New York City-based actor and audiobook narrator. Davies specializes in audiobooks for teens and young adults, including the House of Night series by P.C. Cast and Kristen Cast. She has performed in New York and regional theaters and is a member of the WorkShop Theater Company in New York City. She has a bachelor's degree from Vassar College, and has studied acting at the Eugene O'Neill National Institute, the British American Drama Academy, the Barrow Group, and Brown University/ Trinity Rep.

"Jacqueline Carey's writing flows so beautifully that her stories beg to be experienced on audio...Narrator Caitlin Davies's youthful voice adds to the authenticity of the main character, Khai, and helps ground the listener in the fantasy...Listeners looking for something different will appreciate this unconventional stand-alone." -AudioFile Magazine