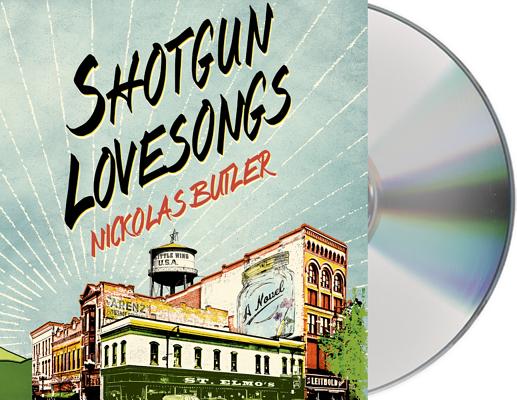 I love debut authors because I want to hear the new voices and find the
rock stars before they even play their first real gig. Which is why I
am so excited about this book—Nickolas Butler is going to be one of
those rock stars. This book is about a group of friends, ten or so
years after they graduated from high school. There is literally a rock
star in the bunch, as well as a famous rodeo guy who got hit by one too
many bulls (and bottles), a married couple with small children and a big
farm to worry about, and a wheeler-dealer commoditiest guy who is
collapsing under the weight of his facade. They are closer than close,
yet everyone has a secret side that the others don't know about.  All of
them feel lonely in some way, and yet they know that they all can rely
on the others. I fell in love with every one of them. I didn't want
the book to end—I wanted to go to dinner with them, or go dancing with
the whole town down at the mill. But mostly, I want this new writer to
keep writing. And I want you all to read this first one—I'm betting
you'll be just as hungry as I am for more." ~Jackie

— Jackie reads & reviews so many books it'll make your head spin—one of TC's most valuable assets.

This is about a group of friends who have known each other since high
school, and who return to their Wisconsin hometown of Little Wing from
far-flung locales, to ground themselves and assess their lives thus far.
They are musicians, rodeo riders, best friends, drunkards, entrepreneurs, and childhood sweethearts. A sort of “Big Chill”
gathering for this decade, these people could portray anyone’shometown
relationships – the current interests,the past hook-ups and old loves,
all interwovenamong these Midwestern lives. And that is the
beauty of Butler’s writing -- that his characters represent not just the
collective hope of America, but the purest voice of any one of us,
holding our note solid and clear. ~Judy S.

— Judy S. is the pilot of our Espresso Book Machine & an occasional book blogger

It's a place like hundreds of others, nothing special, really. But for four friends—all born and raised in this small Wisconsin town—it is home. And now they are men, coming into their own, or struggling to do so.

One of them never left, still working the family farm that has been tilled for generations. But others felt the need to move on, with varying degrees of success. One trades commodities, another took to the rodeo circuit, and one of them even hit it big as a rock star. And then there's Beth, a woman who has meant something special in each of their lives.

Now all four are brought together for a wedding. Little Wing seems even smaller than before. While lifelong bonds are still strong, there are stresses—between the friends, between husbands and wives. There will be heartbreak, but there will also be hope, healing, even heroism as these memorable people learn the true meaning of adult friendship and love.

Seldom has the American heartland been so richly and accurately portrayed. Though the town may have changed, the one thing that hasn't is the beauty of the Wisconsin farmland, the lure of which, in Nickolas Butler's hands, emerges as a vibrant character in the story. Shotgun Lovesongs is that rare work of fiction that evokes a specific time and place yet movingly describes the universal human condition. It is, in short, a truly remarkable audiobook—a novel that once listened to will never be forgotten.

NICKOLAS BUTLER was born in Allentown, Pennsylvania, and raised in Eau Claire, Wisconsin.  His writings have appeared in: Narrative Magazine, Ploughshares, The Kenyon Review Online, The Progressive, The Christian Science Monitor, and elsewhere.  A graduate of the University of Wisconsin and the Iowa Writer’s Workshop, he currently lives in Wisconsin with his wife and their two children. Shotgun Lovesongs is his first novel.

Ari Fliakos is an actor with experience in television, radio, film, theater, and voiceovers. His narration of Seth Patrick’s Reviver won an Audie for paranormal fiction. He has narrated Black Site and Tier One Wild by Dalton Fury, as well as Gangster Squad, The Inquisitor, and Shotgun Lovesongs. On screen, he is best-known for his roles in Law & Order, Pills, and Company K.

An actor of both stage and screen, SCOTT SHEPHERD is known for roles in the recent films And So it Goes, Side Effects, and Brief Reunion. He belongs to two major theater groups, The Wooster Group and Elevator Repair Service through which he performs both locally and abroad. Shepherd is widely known for his natural memorization skills after he recited the entirety of Fitzgerald’s The Great Gatsby for a Public Theater production of the show Gatz.

Scott Sowers has narrated numerous audiobooks, including books by Douglas Preston, Robert Ludlum, John Hart, and Nicholas Sparks. He was named the 2008 Best Voice in Mystery & Suspense by AudioFile magazine. AudioFile also awarded Sowers an Earphones Award for his narration of John Hart’s Down River, writing, “[providing] a bewitching rhythm and pace, expertly capturing and elevating this story of redemption. The combination of Hart and Sowers provides the perfect marriage of prose and voice. Together they enable the book to transcend genre fiction and become something exceptional.”

Sowers is also an accomplished actor of both stage and screen. His theater credits include roles in Inherit the Wind, A Streetcar Named Desire, Bus Stop, and A Few Good Men. His many television credits include guest roles on Law & Order, The Black Donnellys, Six Degrees, All My Children, and the Hallmark Channel’s Season for Miracles. He has also appeared in the films Trust the Man, The Village and The Ten.

“Grabs the listener by the ears and doesn't let go… there's no question that all the narrators connect with the characters' emotional journeys.” —AudioFile Magazine

“Using different narrators for the various characters is a brilliant move. Each is polished and well worth hearing.” —Christian Science Monitor