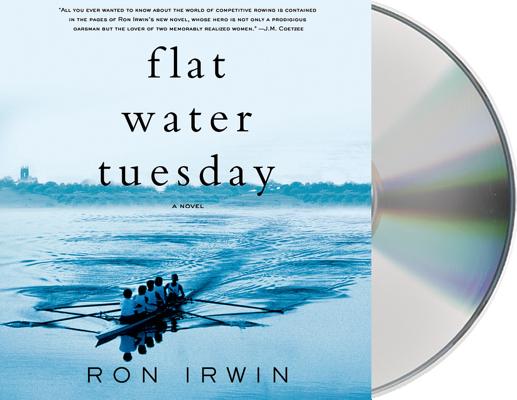 By Ron Irwin, Holter Graham (Read by)
Please email or write store for pricing and availability information.
Hard to Find

“Rob, Connor, John, and Chris are the 'God Four' crew of the famed varsity boat at the Fenton Prep School. These four, along with their coxswain, Ruth, form a tight group with one common goal - to defeat their strongest rival, the Warwick School. This beautifully written novel explores the camaraderie, competition, joy, sorrow, and unbelievable guilt that follow this crew team from their youth to adulthood. Irwin skillfully weaves the past with the present in this story of pain and forgiveness that brings the reader to a heart-wrenching conclusion. A compelling read with a poignant message.”
— Beverly Bartczak, The Fine Print, Lakeside, OH

Rob Carrey, the son of a working-class cabinet maker, arrives at the Fenton School with a scholarship to row and a chip on his shoulder. Generations of austere Fenton men have led the rowing team, known as the God Four, to countless victories but none are as important or renowned as the annual Tuesday-afternoon race against their rival, Warwick.

But first Rob must complete months of preparation driven by their captain, Connor Payne's vicious competitive nature. As the race nears, the stakes rise, tempers and lusts are fueled, and no one can prevent the horrible tragedy that befalls one of them.

Fifteen years later, Rob returns home from a film shoot in Africa to end a heartbreaking relationship with his girlfriend, Carolyn. But when a phone call from one of the God Four compels him to attend the reunion at Fenton, no part of Rob's past remains sequestered for long and nothing about his future is certain.

As much about the sport of rowing as it is a novel of finding oneself, not once, but again in mid-life; Ron Irwin's "Flat Water Tuesday" is a testament to the pride and passion of youth, and an ode to the journey of forgiveness.

A stunning novel of boarding school, family secrets, deep and passionate love, and the brutal pain of sports training.

RON IRWIN was born and raised in Buffalo, New York, and attended boarding school and college in New England, where he was a member of a number of winning rowing crews. He is currently the writer in residence for the University of Cape Town's MA in Creative Writing program, where he has taught since 1999. Irwin holds a Masters in Literary Studies and a Masters in Creative Writing, and has worked as a freelance documentary filmmaker and journalist. He is married and has three children. HOLTER GRAHAM, winner of AudioFile's 2008 Best Voice in Science Fiction & Fantasy for Sherrilyn Kenyon's Acheron, is a stage, television, and screen actor. He has recorded numerous audiobooks, including much of Sherrilyn Kenyon's bestselling Dark-Hunter series. The winner of multiple AudioFile Earphones Awards, he has also read works by Scott Turow, Dean Koontz, C. J. Box, and Stephen Frey.

“If you loved The Art of Fielding, you’ll love this novel…With passion and skill Holter Graham performs the often maddeningly perception-resistant Rob Carrey, the scholarship kid who must transform himself from lone sculler to team rower, and Graham’s racing sequences are heart pounding…Graham delivers a fast-paced, emotional, and thoroughly satisfying listening experience” – AudioFile Magazine

“It may be premature to declare Ron Irwin’s ‘Flat Water Tuesday’ the best audiobook of 2013, but I’ll do so without reservation…If you’ve never heard Holter Graham read a novel, a delight awaits you. He navigates seamlessly between the teenage and adult Carrey, and pulls off other voices – including those of coxswain Ruth and girlfriend Carolyn – with facility. His meter and tone enhance Irwin’s stirring writing. In short, Graham makes ‘Flat Water Tuesday’ the best way to ‘read’ this memorable novel.” – The Star-Ledger

“Actor Holter Graham, who narrates this book, has a knack for these young-men-on-the-brink stories, and he was spot-on for Richard Ford’s Canada and Chad Harbach’s The Art of Fielding. His performance is just as satisfying in Flat Water Tuesday, and he is particularly good in the competition sequences, giving Irwin’s best prose the voice it deserves.” – The Chicago Tribune

Praise for the print edition of  Flat Water Tuesday

"All you ever wanted to know about the world of competitive rowing is contained in the pages of Ron Irwin's new novel, whose hero is not only a prodigious oarsman but the lover of two memorably realized women."—J.M. Coetzee

"Flat Water Tuesday is the best debut novel I've read this year, a compulsively readable dark drama that weaves multiple storylines toward one marvelous denouement. Ron Irwin writes with confidence and skill and authenticity in this exploration of identity and the poisonous fuel of ambition. It will call other books -- A Separate Peace, The Art of Fielding -- to mind but stands alone as an original and powerful work. I'll read anything Irwin writes after this."—Michael Koryta, New York Times bestselling author of The Prophet

“In Ron Irwin's capable hands, past and present fuse into a haunting meditation on class, guilt, and the perils of victory.  You don't need to have set foot in a scull to be swept along by this affecting book.  Flat Water Tuesday is the debut of a deft and talented new voice.”—Eric Puchner, author of Pen/Faulkner Award-finalist, Model Home

“With echoes of A Separate Peace, Ron Irwin's wonderful Flat Water Tuesday is a masterful coming of age story about making one's place in the world, about the sacrifices love asks of us and of the rewards it may give us, about friendship and responsibility and so many other aspects of being human. It's compelling, moving and often heart-breaking -- all of the things we want good novels to be.”—Joe Schuster, author of The Might Have Been

“A gripping read.  If you’ve ever marveled at the fluidity of a quadruple scull cutting through water in first light, and wondered what makes its 4-man motor work, this book will provide the answers, and then some.  Irwin is adept at revealing the tricky bonds between rowers, and the way those bonds can shape—and misshape—a life.”—Tom McNeal, author of To Be Sung Underwater, USA Today 2011 Best Book of the Year

"The opening scene of Ron Irwin's lovely debut novel left me breathless.  Irwin writes astutely about finding one's place in the world, testing the limits of our endurance, and how we find the strength to carry on.”—Amanda Eyre Ward, author of Close Your Eyes

"In taut, muscular prose Irwin details the punishing training regimen of The God Four, a crew of competitive oarsmen who commit themselves body and soul to the pain and glory of their sport. Flat Water Tuesday is a powerful consideration of the exhilarating love of competition and the high cost of victory. Ron Irwin has written a propulsive, heart-stopping story in the tradition of such sporting classics as Alan Sillitoe’s “The Loneliness of The Long Distance Runner,” and Bernard Malamud’s The Natural.  Flat Water Tuesday is a world-class champion of a novel."—Amber Dermont, NY Times bestselling author of The Starboard Sea

"Ron Irwin’s rowing tale —Flat Water Tuesday – brings to life a rite of passage that is complex, insightful, and stirring.  Inside the gunnels of the rowing shell secrets are kept. Powerful fathers produce legendary sons, and legends arise that haunt some forever.  His artistry weaves heroism, rivalry, romance, tragedy, and raw life together inside the ethereal dynamics of a boarding school crew—not any crew, but “The God Four”—which, in the end, leaves all to wrestle with the reckoning that God was indeed watching.  Written in the tradition of Dead Poets Society, Ron Irwin’s story is a must for anyone who loves rowing, sports, or just a darn good read."—Susan Saint Sing, member of the 1993 U.S. National Rowing Team and author of The Wonder Crew

"Flat Water Tuesday is more than just a wonderful coming-of-age novel, it's a gripping and beautifully drawn portrait of a man coming to grips with his demons. His unforgettable story will take you through heartbreak and back, where resilience can teach you not just about achievement, but also about love."—Elizabeth Percer, author of An Uncommon Education

"A biting, beautiful novel about the cost of winning and the lessons of loss. In Robert Carrey, Ron Irwin has created a character of precision and depth, a man who must learn that he cannot scull through life alone." —Jennifer Miller, author of The Year of the Gadfly