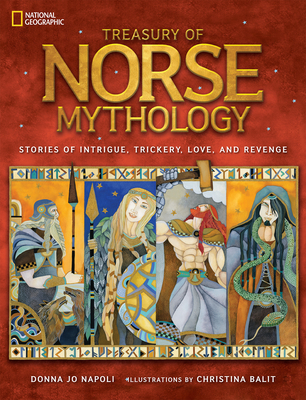 
Available to Order - Usually Arrives in Our Store in 4 to 7 Days
Coinciding with the new Rick Riordan Magnus Chase series and the Marvel Age of Ultron DVD, featuring Thor, comes a new look at Asgard and the timeless tales of ancient Scandinavia. Classic stories and dazzling illustrations of gods, goddesses, heroes and monsters come to life in a stunning tableau of Norse myths, including those of the thunder god Thor, the one-eyed god and Allfather Odin, and the trickster god Loki. The lyrical storytelling of award-winning author Donna Jo Napoli dramatizes the timeless tales of ancient Scandinavia. This book is the third in the trilogy that includes the popular National Geographic Treasury of Greek Mythology and National Geographic Treasury of Egyptian Mythology.
DONNA JO NAPOLI is professor of linguistics at Swarthmore College, mother of five, grandmother of five, and the author of more than 80 books for children and young adults. While her undergraduate major was mathematics and her graduate work was in linguistics, she has a profound love of mythology, folklore, and fairy tales. CHRISTINA BALIT is a graduate of the Chelsea School of Art and the Royal College of Art, London. An award-winning dramatist and illustrator, Christina has painted more than 20 children's books, including Blodin and the Beast by Michael Morpurgo, Zoo in the Sky, The Planet Gods, The Lion Bible, National Geographic's Treasury of Greek Mythology, and National Geographic's Treasury Egyptian Mythology. Her author titles include Escape From Pompeii, Atlantis, The Legend of the Lost City, and An Arabian Home. Her plays include Woman With Upturned Skirt, The Sentence, and Needle (winner of the Brave New Role award).

"This is truly a layered work, with the illustrations standing alone as startling works of art, and the frequent informational sections (fact boxes, sidebars, character lists, maps, an introduction, a substantial afterword, and a bibliography) offering a thrilling amount of extra material for true fans." – Children's Book Council Starred Reveiw

"Fans of Rick Riordan’s new book, 'Magnus Chase and the Gods of Asgard,' will want a copy of 'Treasury of Norse Mythology' by Donna Jo Napoli. Napoli’s conversational tone keeps these ancient stories fresh and fun, and the graceful illustrations with gold accents make the book a luxurious gift.” – The Baltimore Sun

"Paired with gorgeous illustrations, this book is a fabulous addition to the family bookshelves."
– KLS.com