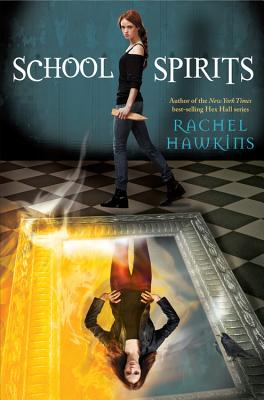 This is book number 4 in the A Hex Hall Novel series.

Fifteen-year-old Izzy Brannick was trained to fight monsters. For centuries, her family has hunted magical creatures. But when Izzy’s older sister vanishes without a trace while on a job, Izzy's mom decides they need to take a break.

Izzy and her mom move to a new town, but they soon discover it’s not as normal as it appears. A series of hauntings has been plaguing the local high school, and Izzy is determined to prove her worth and investigate. But assuming the guise of an average teenager is easier said than done. For a tough girl who's always been on her own, it’s strange to suddenly make friends and maybe even have a crush.
Can Izzy trust her new friends to help find the secret behind the hauntings before more people get hurt?

* “Hawkins dials the level of humor up to high throughout most of the book, with deftly phrased witticisms in both the narrative…and her characters’ dialogue. Her characterizations shine as original and funny, especially Dex and Torin, an Elizabethan-era warlock trapped for centuries in the Brannicks’ mirror, who dispenses dubious advice.” —Kirkus, starred review

"In true Hawkins fashion, School Spirits combines romance, intrigue, and the paranormal with humor and high-school drama to produce a light read that bodes well for another Hawkins series, this time featuring the Brannicks." —Booklist“[A]n exciting paranormal romance that provides a dynamic and riveting plot line that will keep readers eagerly turning pages.” —VOYA

Rachel Hawkins (www.rachel-hawkins.com) was a high school English teacher before becoming a full-time writer. She lives with her family in Alabama. To the best of her knowledge, Rachel is not a witch, though some of her former students may disagree.