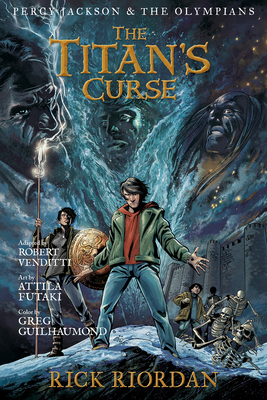 A new prophecy leads to a dangerous quest.

When Percy receives an urgent distress call from Grover, he immediately prepares for battle. He knows he’ll need his powerful demigod allies, Annabeth and Thalia, at his side; his trusty bronze sword, Riptide; and…a ride from his mom.

The demigods race to the rescue, only to find that Grover has made an important discovery: two new powerful half-bloods, whose parentage is unknown. But that’s not all that awaits them. The Titan lord, Kronos, has set up his most devious trap yet, and the young heroes have just fallen prey.

Now, Percy and his friends are faced with their most dangerous challenge—the chilling prophecy of the Titan’s Curse. They must rescue the goddess Artemis by the Winter Solstice, or all will be lost…including Annabeth.

RICK RIORDAN is the author of all the books in the New York Times #1 best-selling Percy Jackson and the Olympians series: The Lightning Thief, The Sea of Monsters, The Titan’s Curse, The Battle of the Labyrinth, and The Last Olympian. His other novels for children include the New York Times #1 best-selling series The Kane Chronicles (The Red Pyramid, The Throne of Fire, and The Serpent’s Shadow) and The Heroes of Olympus (The Lost Hero, and The Son of Neptune). He lives in San Antonio, Texas with his wife and two sons. Learn more at RickRiordan.com.


Attila Futaki is the New York Times best-selling illustrator of The Lightning Thief, The Graphic Novel and The Sea of Monsters, The Graphic Novel. He also illustrated and colored Conan the Barbarian (written by Victor Gischler) and Severed (written by Scott Snyder and Scott Tuft). Attila studied at the International School of Comics in Florence, Italy. He lives in Budapest, Hungary. Visit AttilaFutaki.blogspot.com.

Greg Guilhaumond studied drawing and animation at the European School of Visual Arts. After graduating, he worked in web and graphic design while also doing illustrations for various role-playing games and magazines and producing underground comics. Greg provided the colors for Severed. The Titan’s Curse, The Graphic Novel is his first book for children. He lives in Tours, France. Visit Doublegarga.canalblog.com.