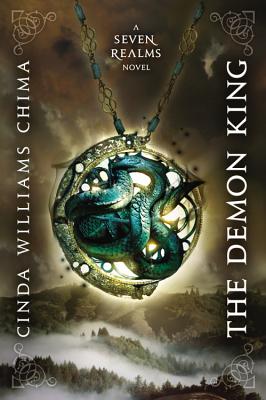 This is book number 1 in the A Seven Realms Novel series.

“Cinda Williams Chima's latest is 500 phenomenal pages of wizards and street rats, stolen artifacts and secret passages, and, best of all, Han and Raisa, a hero and heroine that you'll root for immediately. If you're looking for fantastic world building, snappy dialogue, and a plot that makes the pages fly, look no further.”
— Sarah Todd, Children's Book World, Haverford, PA

This is a classic fantasy novel with heart, mystery, and testament. Han has never fully fit in anywhere. The clan who took him in doesn’t trust him, his thieving days are over, and he has his family to take care of. Not to mention the silver cuffs around his wrists, impossible to take off, weigh heavy on his mind. Until he finds the amulet. Until his whole life is ruined after taking it. Until Raisa ana’Marianna comes across his path and their fates are woven since. I loved this book, even after multiple reads. -- Makayla R., Colfax Café Manager

— From Staff Picks
New York Times bestselling author Cinda Williams Chima's first installment in a thrilling new fantasy series, in which the lives of Han Alister and the brave Princess Raisa collide in a magical and dangerous adventure.  One day Han Alister catches three young wizard setting fire to the sacred mountain of Hanalea. Han takes an amulet away from Micah Bayar, son of the High Wizard, to ensure the boy won't use it against him. The amulet once belonged to the Demon King, who nearly destroyed the world a millennium ago. With a magical piece so powerful at stake, Han knows that the Bayars will stop at nothing to get it back.

Meanwhile, Princess Raisa ana'Marianna has her own battle to fight. She's just returned to court after three years of riding and hunting with her father's family. Raia aspires to be like Hanalea, the legendary warrior queen who killed the Demon King and saved the world. But it seems that her mother has other plans for her-plans that include a suitor who goes against everything the Queendom stands for.

The Seven Realms will tremble when the lives of Han and Raisa collide in this stunning page-turner from best-selling author Cinda Williams Chima.

New York Times and USA Today bestselling author Cinda Williams Chima grew up with talking animals and kick-butt Barbies. She began writing poetry and stories in third grade and novels in junior high school. These days she writes fantasy fiction for teens of all ages. Her Heir Chronicles contemporary fantasy series includes The Warrior Heir, The Wizard Heir, The Dragon Heir, The Enchanter Heir, and The Sorcerer Heir.

Her high fantasy Seven Realms series launched with The Demon King, followed by The Exiled Queen, The Gray Wolf Throne, and The Crimson Crown; she is also the author of the Shattered Realms series, including Flamecaster, Shadowcaster, Stormcaster, and Deathcaster, among other works. She lives in Ohio with her family, and invites you to visit her online at cindachima.com.

"Themes of political and magical power, love, sacrifice, courage, and even revisionist history recur throughout the tale and offer the intelligent reader food for thought. The pacing of the narrative and revelation of secrets make the execution of the story itself breathtaking and an excellent choice for reluctant readers. A virtually flawless tale, this book will leave readers anxiously awaiting the next novel in The Seven Realms."—VOYA

"The world-making here is especially effective, with a multiplicity of settings and societal segments that interweave with one another while providing separate layers of interest and intrigue. Magic use and lore provide another such layer, but not at the expense of thoughtful and complex character development and the unsettling questioning of the mythology that grounds the precarious balance of power. Han and Raisa are convincing as impulsive teens who are nonetheless emergent leaders, and readers will eagerly await the next installment of their adventures."—Bulletin of the Center for Children's Books

"Rich characterization and exquisite world building...Chima forges an intricate world, alloying standard genre tropes in unexpected ways and inlaying intrigue amid a delicately crafted setting of history and legend. Dozens of characters, complex and distinct in personality, are placed with jewel-like precision, set off by dark glints of villainy."—Kirkus Reviews

"With full-blooded, endearing heroes, a well-developed supporting cast and a detail-rich setting, Chima explores the lives of two young adults, one at the top of the world and the other at the bottom, struggling to find their place and protect those they love. An auspicious start to the planned Seven Realms [series]."—Publishers Weekly