Buy-In: Saving Your Good Idea from Getting Shot Down (Hardcover) 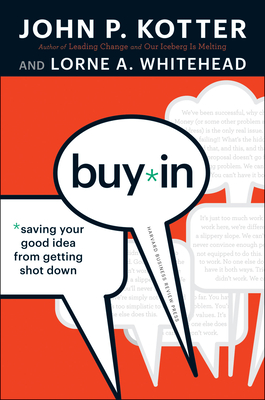 Buy-In: Saving Your Good Idea from Getting Shot Down (Hardcover)


On Our Shelves Now
You've got a good idea. You know it could make a crucial difference for you, your organization, your community. You present it to the group, but get confounding questions, inane comments, and verbal bullets in return. Before you know what's happened, your idea is dead, shot down. You're furious. Everyone has lost: Those who would have benefited from your proposal. You. Your company. Perhaps even the country. It doesn't have to be this way, maintain John Kotter and Lorne Whitehead. In Buy-In, they reveal how to win the support your idea needs to deliver valuable results. The key? Understand the generic attack strategies that naysayers and obfuscators deploy time and time again. Then engage these adversaries with tactics tailored to each strategy. By inviting in the lions to critique your idea--and being prepared for them--you'll capture busy people's attention, help them grasp your proposal's value, and secure their commitment to implementing the solution. The book presents a fresh and amusing fictional narrative showing attack strategies in action. It then provides several specific counterstrategies for each basic category the authors have defined--including: - Death-by-delay: Your enemies push discussion of your idea so far into the future it's forgotten. - Confusion: They present so much data that confidence in your proposal dies. - Fearmongering: Critics catalyze irrational anxieties about your idea. - Character assassination: They slam your reputation and credibility. Smart, practical, and filled with useful advice, Buy-In equips you to anticipate and combat attacks--so your good idea makes it through to make a positive change.

John P. Kotter is the Konosuke Matsushita Professor of Leadership, Emeritus, at Harvard Business School and is widely considered the world's foremost authority on leadership and change. Lorne A. Whitehead is Leader of Education Innovation at the University of British Columbia, where he has also been a professor and the NSERC/3M Chairholder in the Department of Physics and Astronomy.