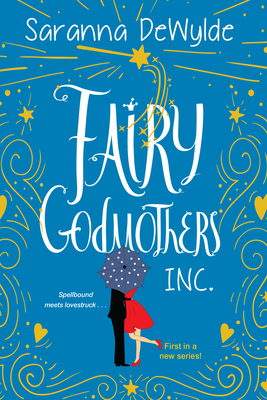 "The best of the fairy tale world. Readers will fall head over heels for both the quirky town and the achingly sweet second-chance romance." --Publishers Weekly STARRED REVIEW

First in a magical new series full of edgy and hilarious antics, this is the read you need to finally give your year the fairy-tale ending it deserves! An enchanting story of love, dreams, and second chances--a delightful read for cold winter nights that fans of Christina Lauren, Tessa Bailey, and Kerry Winfrey can't miss...

If love is the source of all the magic in the universe, and the town of Ever After, Missouri, is the epicenter of enchantment, then the locals are in dire need of a reboot. At least according to resident fairy godmothers Petunia, Jonquil, and Bluebonnet. Their solution? Blow a bit of fairy dust in the direction of those in need of romance...What could possibly go wrong?

SOME KIND OF AWFUL...

Lucky Fujiki's first name is a cosmic joke. Her luck is so bad, even the number seven steers clear of her. But when her adorable godmothers ask for a favor, Lucky can't say no. After all, it's just a little one--to save the world's magic. Lucky can already feel the bad juju waiting to strike. And her mission is even worse than she imagined: to promote Ever After as a wedding destination by faking a marriage to her first love and long-time ex, Ransom Payne--he of the Embarrassing Incident that neither of them will ever live down...

OR ALL KINDS OF WONDERFUL?

Ransom Payne has spent years building an impressive new reputation for himself, and now his godmothers want him to pretend to wed the one girl he'd like most to forget? Sure, weddings in Ever After could be a huge boon for his chocolate business, but risking more up-close-and-personal time with Lucky? Considering the stakes, it's a curse he'll have to bear, at the risk of being humiliated--or perhaps, bewitched...
Saranna DeWylde is a former corrections officer and full time Amazon Goddess who had her fill of shanks and decided her pen was meant for Happily Ever Afters instead of disciplinary reports. She lives in the Midwest with her very own Prince Charming and loves to hear from her readers. You can find her at www.sarannadewylde.com.
Advance Praise for Fairy Godmothers, Inc.

“What follows takes the best of the fairy tale world, infuses it with modern sensibility and humor, and places the emphasis firmly on personal growth. Readers will fall head over heels for both the quirky town and the achingly sweet second-chance romance.”
—Publishers Weekly STARRED REVIEW

“Funny and steamy, this book was like a sexy, grown-up Harry Potter!”
—First for Women on How to Marry a Warlock in 10 Days

"With a gritty, raw, and engrossing voice, Lunsford splays out the facts of her dramatic life as a corrections officer at an all-male maximum security state prison.” Not for the easily offended or fainthearted, Lunsford's daring book will thrill and titillate willing readers."
—Publisher's Weekly for Sweet Hell on Fire (by Saranna DeWylde writing as Sara Lunsford)

"Toss in some interfering relatives, the Devil himself, and a dead hooker on a mission of revenge, and you have a slightly loopy, occasionally crass, often funny tale...frequent, explicit, and inventive sex scenes, making this a rather spicy treat."
—Publishers Weekly for How to Lose a Demon in 10 Days

“A wild romp.”
—The Seattle Post-Intelligencer on Hex and the Single Witch

“This isn’t a sweetly tender, hearts and butterflies type of book where the heroine soothes the wounded hero while butterflies and songbirds dance on the rainbow that comes after the storm kind of book. It’s more hot-and-heavy against the wall (or rocks, or grass, or floor), girlfriends laughing and plotting over margaritas, witchy Cracker Barrel giggle-fest where amusingly impossible situations are paired with subtle-yet-powerful character studies of people we’ve all grown up hearing about.”
—DearAuthor on Desperate Housewives of Avalon