The Inconceivable Life of Quinn (Paperback) 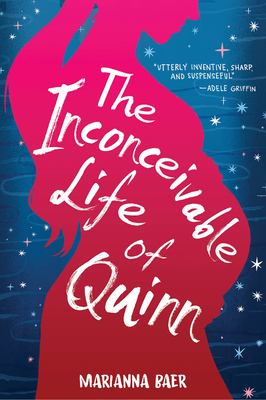 The Inconceivable Life of Quinn (Paperback)


Coming Soon - Available for Pre-Order Now
Now in paperback, a compelling YA story with a magical realism twist about a girl whose pregnancy shocks everyone . . . most of all her

Quinn Cutler is sixteen, the daughter of a candidate for congress in Brooklyn, and a student at a private school in Park Slope. She’s also pregnant, a situation made infinitely more shocking by the fact that she has no memory of actually having sex. Scared and confused, Quinn struggles to piece together what might have happened: An unlikely accident while she and her boyfriend were fooling around? A rape that she’s repressing from trauma? Before she’s had any revelations, the situation becomes public, putting her most intimate life up for scrutiny and ridicule, and jeopardizing her father’s political career. Religious fanatics begin gathering at the Cutlers’ house, believing she’s pregnant with the next Messiah. As things spiral out of control through a frenzy of brutal online gossip and rumor, the clues that Quinn uncovers reveal more about her childhood and her family than about the pregnancy itself. She starts to realize that much of her life is built on secrets and lies—strange, possibly supernatural ones that her father is desperate to keep concealed. And uncovering the mysterious secrets is the only way she’ll learn the truth about her pregnancy, and the only way she’ll discover why, despite all evidence and logic, a deep down part of her believes the truth isn’t an ugly one. Might she, in fact, be a virgin?
Marianna Baer is the author of The Inconceivable Life of Quinn, which Publishers Weekly called "a delicate, complicated, and engrossing exploration of the collision between real life and the inexplicable" in a starred review. She’s a graduate of Vermont College of Fine Arts with an MFA in Writing for Children and Young Adults. She lives in Brooklyn, New York.