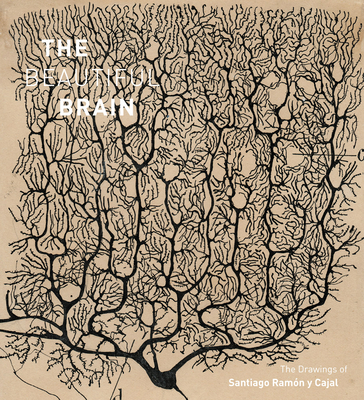 
Available to Order - Usually Arrives in Our Store in 4 to 7 Days
“Among the world’s greatest scientific illustrations. . . . They posit the thing between your ears as an immense cosmic universe, or at least one of the most intricate of all of nature’s creations. That the images are also undeniable as art only adds to the complexity.” —New York Times

At the crossroads of art and science, Beautiful Brain presents Nobel Laureate Santiago Ramón y Cajal’s (1852–1934) contributions to neuroscience through his groundbreaking artistic brain imagery. Here is a selection of his exquisite drawings of brain cells, brain regions, and neural circuits with accessible descriptive commentary. The drawings are explored in the text from multiple perspectives: Santiago Ramón y Cajal was the father of modern neuroscience and an exceptional artist. He devoted his life to the anatomy of the brain, the body’s most complex and mysterious organ. His superhuman feats of visualization, based on fanatically precise techniques and countless hours at the microscope, resulted in some of the most remarkable illustrations in the history of science.

This book is the companion to the traveling exhibition that marked the first time that many of these works, which are housed at the Instituto Cajal in Madrid, have been seen outside of Spain.

In addition to showcasing Cajal’s contributions to neuroscience and exploring his artistic roots and achievement, Beautiful Brain looks at his work in relation to contemporary neuroscience imaging, appealing to general readers and professionals alike.
Larry W. Swanson is the author of Brain Architecture (2012) and a past President of the Society for Neuroscience. He is a neuroscientist at the University of Southern California. Eric A. Newman, Alfonso Araque, and Janet Dubinsky are distinguished neuroscientists at the University of Minnesota. Lyndel King is the director and chief curator of the Frederick R. Weisman Art Museum, Minneapolis. Eric Himmel is editor in chief at Abrams Books, New York.