The Husbands and Wives Club: A Year in the Life of a Couples Therapy Group (Paperback) 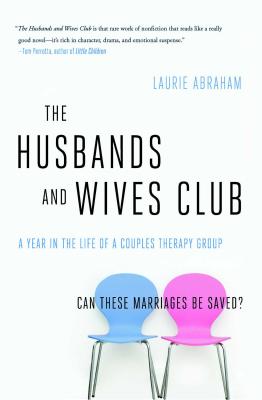 The Husbands and Wives Club: A Year in the Life of a Couples Therapy Group (Paperback)

For more than a year, journalist Laurie Abraham sat in with five troubled couples as they underwent the searing process of group marriage therapy. Published as The New York Times Magazine’s cover story "Can This Marriage Be Saved?" the resulting article generated intense reader response and received the Award for Excellence in Journalism from the American Psychoanalytic Association. Though the article allowed Abraham to focus on only one couple, this book, which grew out of it and the reaction it inspired, tells the moving, fascinating story of all five.
The couples: Can Leigh and Aaron find the intimacy their marriage lacks; will Bella and Joe resolve the imbalance of power that threatens to topple their marriage; are Sue Ellen and Mark as ideal as they seem; what happened to Rachael that Michael cannot acknowledge; and do Marie and Clem, with the help of therapist Judith Coché, come back from the brink of divorce?
With the dexterity of a novelist, Abraham recounts the travails, triumphs, and reversals that beset the five couples. They work with their therapist—and each other—to find out whether they can rediscover the satisfaction in marriage that they once had. At times wrenching, at times inspiring, the sessions bring out the long-hidden resentments, misunderstandings, unmet desires, and unspoken needs that bedevil any imperiled couple. At the same time, these encounters provide road maps to reconciliation and revival that can be used by anyone in a relationship. Along the way, the author draws on her explorations of literature and Freudian theory, modern science, and today’s cutting-edge research to decode the patterns and habits that suggest whether a troubled marriage will survive or die. Both an important look at the state of marital dysfunction and a reaffirmation of the enduring bonds of love, The Husbands and Wives Club is an extraordinary year in the life of the American marriage.
Laurie Abraham is a freelance writer and senior editor of Elle magazine and the author of Mama Might Be Better Off Dead: The Failure of Health Care in Urban America (University of Chicago Press). Formerly the executive editor of Elle, she’s written for New York Magazine, The New York Times Magazine, Mother Jones, and many other publications. Her work is also included in Best American Essays 2006, as well as the original collections The Bitch in the House (2001), Maybe Baby (2006), and The Secret Currency of Love (2008). Laurie has bachelor’s and master’s degrees in journalism from Northwestern University and a master’s in law from Yale University.