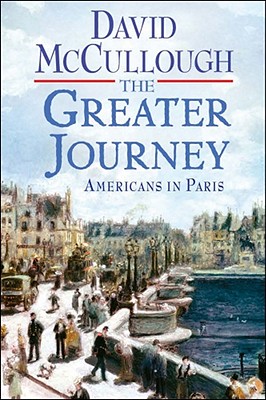 
Email or call for price. Handling fee may apply.
The Greater Journey is the enthralling, inspiring—and until now, untold—story of the adventurous American artists, writers, doctors, politicians, architects, and others of high aspiration who set off for Paris in the years between 1830 and 1900, ambitious to excel in their work.

After risking the hazardous journey across the Atlantic, these Americans embarked on a greater journey in the City of Light. Most had never left home, never experienced a different culture. None had any guarantee of success. That they achieved so much for themselves and their country profoundly altered American history. As David McCullough writes, “Not all pioneers went west.” Elizabeth Blackwell, the first female doctor in America, was one of this intrepid band. Another was Charles Sumner, who enrolled at the Sorbonne because of a burning desire to know more about everything. There he saw black students with the same ambition he had, and when he returned home, he would become the most powerful, unyielding voice for abolition in the U.S. Senate, almost at the cost of his life.

Two staunch friends, James Fenimore Cooper and Samuel F. B. Morse, worked unrelentingly every day in Paris, Cooper writing and Morse painting what would be his masterpiece. From something he saw in France, Morse would also bring home his momentous idea for the telegraph.

Pianist Louis Moreau Gottschalk from New Orleans launched his spectacular career performing in Paris at age 15. George P. A. Healy, who had almost no money and little education, took the gamble of a lifetime and with no prospects whatsoever in Paris became one of the most celebrated portrait painters of the day. His subjects included Abraham Lincoln.

Medical student Oliver Wendell Holmes wrote home of his toil and the exhilaration in “being at the center of things” in what was then the medical capital of the world. From all they learned in Paris, Holmes and his fellow “medicals” were to exert lasting influence on the profession of medicine in the United States.

Writers Ralph Waldo Emerson, Nathaniel Hawthorne, Mark Twain, and Henry James were all “discovering” Paris, marveling at the treasures in the Louvre, or out with the Sunday throngs strolling the city’s boulevards and gardens. “At last I have come into a dreamland,” wrote Harriet Beecher Stowe, seeking escape from the notoriety Uncle Tom’s Cabin had brought her. Almost forgotten today, the heroic American ambassador Elihu Washburne bravely remained at his post through the Franco-Prussian War, the long Siege of Paris and even more atrocious nightmare of the Commune. His vivid account in his diary of the starvation and suffering endured by the people of Paris (drawn on here for the first time) is one readers will never forget. The genius of sculptor Augustus Saint-Gaudens, the son of an immigrant shoemaker, and of painters Mary Cassatt and John Singer Sargent, three of the greatest American artists ever, would flourish in Paris, inspired by the examples of brilliant French masters, and by Paris itself.

Nearly all of these Americans, whatever their troubles learning French, their spells of homesickness, and their suffering in the raw cold winters by the Seine, spent many of the happiest days and nights of their lives in Paris. McCullough tells this sweeping, fascinating story with power and intimacy, bringing us into the lives of remarkable men and women who, in Saint-Gaudens’s phrase, longed “to soar into the blue.” The Greater Journey is itself a masterpiece.
David McCullough has twice received the Pulitzer Prize, for Truman and John Adams, and twice received the National Book Award, for The Path Between the Seas and Mornings on Horseback. His other acclaimed books include The Johnstown Flood, The Great Bridge, Brave Companions, 1776, The Greater Journey, and The Wright Brothers. He is the recipient of numerous honors and awards, including the Presidential Medal of Freedom, the nation’s highest civilian award. Visit DavidMcCullough.com.
"An epic of ideas, as well as an exhilirating book of spells . . . This is history to be savored."

“An ambitious, wide-ranging study of how being in Paris helped spark generations of American genius. . . . A gorgeously rich, sparkling patchwork, eliciting stories from diaries and memoirs to create the human drama McCullough depicts so well.”
—Kirkus Reviews (starred review)

“A lively and entertaining panorama. . . . By the time he shows us the triumphant Exposition Universelle in 1889, witnessed through the eyes of such characters as painters John Singer Sargent and Robert Henri, we share McCullough's enthusiasm for the city and his affection for the many Americans who improved their lives, their talent and their nation by drinking at the fountain that was Paris.”
—Michael Sims, The Washington Post

"From a dazzling beginning that captures the thrill of arriving in Paris in 1830 to the dawn of the 20th century, McCullough chronicles the generations that came, saw and were conquered by Paris. . . . The Greater Journey will satisfy McCullough's legion of loyal fans . . . it will entice a whole new generation of Francophiles, armchair travelers and those Americans lucky enough to go to Paris before they die."
—Bruce Watson, The San Francisco Chronicle


"McCullough's skill as a storyteller is on full display. . . . The idea of telling the story of the French cultural contribution to America through the eyes of a generation of aspiring artists, writers and doctors is inspired. . . a compelling and largely untold story in American history."
—Kevin J. Hamilton, The Seattle Times


"There is not an uninteresting page here as one fascinating character after another is explored at a crucial stage of his development. . . . Wonderful, engaging writing full of delighting detail."
—John Barron, Chicago Sun-Times


“McCullough’s research is staggering to perceive, and the interpretation he lends to his material is impressive to behold. . . . Expect his latest book to ascend the best-seller lists and be given a place on the year-end best lists.”
—Booklist (starred review)

“For more than 40 years, David McCullough has brought the past to life in books distinguished by vigorous storytelling and vivid characterizations. . . . . McCullough again finds a slighted subject in The Greater Journey, which chronicles the adventures of Americans in Paris. . . . Wonderfully atmospheric.”
—Wendy Smith, Los Angeles Times

"A rich and enjoyable literary experience. There are reminders on almost every page why Mr. McCullough is one of the nation's great popular historians."
—Claude R. Marx, The Washington Times


"McCullough wants us to know more than just the dry facts of our country's history; he wants us to the share the vivid emotional experience of those who inhabited it. . . . [he] reminds us of that with each shimmering, resonant page he writes. . . . The Greater Journey is the exhilarating story of what Americans learned [in Paris]."
—Julia Keller, Chicago Tribune