Just Like Us: The True Story of Four Mexican Girls Coming of Age in America (Hardcover) 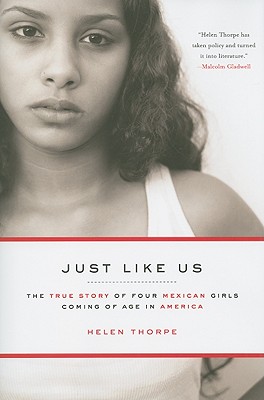 By Helen Thorpe
$30.00
Available to Order - Usually Arrives in Our Store in 4 to 7 Days

In this eye-opening and poignant true story about the experiences of four young Mexican women coming of age in Denver—two who have legal documentation, two who don’t—Helen Thorpe “puts a human face on a frequently obtuse conversation” (O, The Oprah Magazine), exploring themes of identity and friendship and exposing the reality of life for many undocumented immigrants seeking the American dream.

Just Like Us tells the story of four high school students whose parents entered this country illegally from Mexico. We meet the girls on the eve of their senior prom in Denver, Colorado. All four of the girls have grown up in the United States, and all four want to live the American dream, but only two have documents. As the girls attempt to make it into college, they discover that only the legal pair sees a clear path forward. Their friendships start to divide along lines of immigration status.

Then the political firestorm begins. A Mexican immigrant shoots and kills a police officer. The author happens to be married to the Mayor of Denver, a businessman who made his fortune in the restaurant business. In a bizarre twist, the murderer works at one of the Mayor’s restaurants—under a fake Social Security number. A local Congressman seizes upon the murder as proof of all that is wrong with American society and Colorado becomes the place where national arguments over immigration rage most fiercely. The rest of the girls’ lives play out against this backdrop of intense debate over whether they have any right to live here.

Just Like Us is a coming-of-age story about girlhood and friendship, as well as the resilience required to transcend poverty. It is also a book about identity—what it means to steal an identity, what it means to have a public identity, what it means to inherit an identity from parents. The girls, their families, and the critics who object to their presence allow the reader to watch one of the most complicated social issues of our times unfurl in a major American city. And the perspective of the author gives the reader insight into both the most powerful and the most vulnerable members of American society as they grapple with the same dilemma: Who gets to live in America? And what happens when we don’t agree?

Helen Thorpe was born in London to Irish parents and grew up in New Jersey. Her journalism has appeared in The New York Times Magazine, New York magazine, The New Yorker, Slate, and Harper’s Bazaar. Her radio stories have aired on This American Life and Sound Print. She is the author of Just Like Us, Soldier Girls, and The Newcomers and lives in Denver.

"Just Like Us beautifully and powerfully reminds us of the individuals whose lives lie at the center of the chaos that is our approach to immigration. Helen Thorpe has taken policy and turned it into literature." -- Malcolm Gladwell

"With a gaze that is tender and ever alert, Helen Thorpe follows the lives of four young women -- Mexican and American -- so alike in their coming-of-age, but separated by the ironies of geography, the border that cuts through the heart." -- Richard Rodriguez, author of Brown: The Last Discovery of America

"This is a penetrating, fair, and refreshingly personal examination of the passions that fuel the immigration controversy in this country. Helen Thorpe measures the arguments on both sides of this national debate against the actual human costs imposed by the status quo. This book will find a central place in this debate." -- Lawrence Wright, Pulitzer Prize-winning author of The Looming Tower: Al-Qaeda and the Road to 9/11

"With a perfect combination of narrative and reflection, empathy and analysis, Helen Thorpe tells both a particular story of four irresistibly engaging young women, and a universal story of the struggle between human aspiration and intractable obstacles. If this book gets widely read, our national conversation on immigration could make a shift from 'shrill and draining' to 'thoughtful and productive.' In this book, the force and power of journalism reach their peak." -- Patricia Nelson Limerick, author of The Legacy of Conquest and Something in the Soil