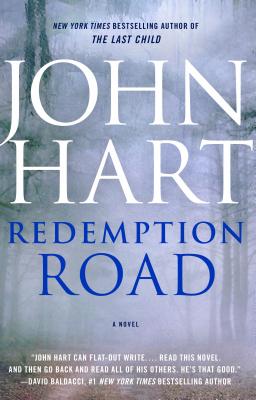 By John Hart
Please email or write store for pricing and availability information.
Out of Print

Len says: "A dark, brilliantly-written novel full of twists, turns, and heartache. Police officer Elizabeth Black finds herself in the center of a maelstrom as state attorneys attempt to indict her for the murder of two depraved sociopaths while she was in the line of duty. At the same time, Adrian Wall, another cop and the man who saved Elizabeth's life, is about to be released from prison, where he served a thirteen year stint for an alleged crime of passion. Hart weaves these two storylines into a gruesome, often chilling, and entirely gripping crime novel that will have you on the edge of your seat all the way to the spectacular ending. (SIDE NOTE: I listened to the audio version of this book. Scott Shepard's narration might be the best I've ever heard.)"

“Hart weaves several plotlines together in this masterful crime novel: the former cop serving hard time for a crime he didn't commit; the son who awaits the release of his mother's killer; the girl whose brutal attackers were tortured and assassinated; and Liz, the cop at the heart of all of these stories, who is, herself, wanted by the police. Like the best crime dramas, there are characters to love, characters to hate, outcomes to root for, and a resolution that readers will not foresee. This book should put John Hart on every reader's radar.”
— Jill Miner (W), Saturn Booksellers, Gaylord, MI