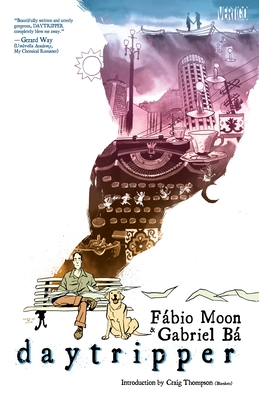 
Available to Order - Usually Arrives in Our Store in 4 to 7 Days
The acclaimed Daytripper follows Bras de Olivias Dominguez during different periods in his life, each with the same ending: his death.

Daytripper follows the life of one man, Bras de Olivias Dominguez. Every chapter features an important period in Bras’ life in exotic Brazil, and each story ends the same way: with his death. And then, the following story starts up at a different point in his life, oblivious to his death in the previous issue—and then also ends with him dying again. In every chapter, Bras dies at different moments in his life, as the story follows him through his entire existence—one filled with possibilities of happiness and sorrow, good and bad, love and loneliness. Each issue rediscovers the many varieties of daily life, in a story about living life to its fullest—because any of us can die at any moment.

Poignant, heartfelt and thoughtful, this comics landmark is one of the most transcendent pieces of graphic storytelling ever to hit the printed page. Brothers Fabio Moon and Gabriel Ba truly compose one of the industry's masterworks.

Twin brothers and multiple Eisner Award winners Gabriel Ba and Fabio Moon were born in Sao Paulo on June 5th, 1976 and have, in one way or another, been telling stories ever since. Gabriel is the artist for the bestselling comics series The Umbrella Academy (Dark Horse), written by My Chemical Romance front-man Gerard Way.

Twin brothers and multiple Eisner Award winners Fabio Moon and Gabriel Ba were born in Sao Paulo on June 5th, 1976 and have, in one way or another, been telling stories ever since. Fabio is an artist for the popular Hellboy spin-off series B.P.R.D (Dark Horse).