Unfinished Business: One Man's Extraordinary Year of Trying to Do the Right Things (MP3 CD) 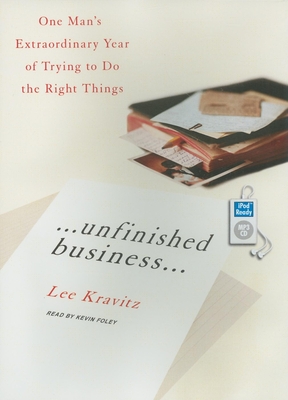 By Lee Kravitz, Kevin Foley (Narrated by)
Please email or write store for pricing and availability information.
Out of Print

After losing his job, Lee Kravitz, a workaholic in his midfifties, took stock of his life and realized just how disconnected he had become from the people who mattered most to him. He committed an entire year to reconnecting with them and making amends. Kravitz takes listeners on ten transformational journeys, among them repaying a thirty-year-old debt, making a long-overdue condolence call, finding an abandoned relative, and fulfilling a forgotten promise. Along the way, we meet a cast of wonderful characters and travel the globe-to a refugee camp in Kenya, a monastery in California, the desert of southern Iran, a Little League game in upstate New York, and a bar in Kravitz's native Cleveland. In each instance, the act of reaching out opens new paths for both personal and spiritual growth. All of us have unfinished business-the things we should have done but just let slip. Kravitz's story reveals that the things we've avoided are exactly those that have the power to transform, enrich, enlarge, and even complete us. The lesson of the book is one that is applicable to us all: Be mindful of what is most important, and act on it. The rewards will be immediate and lasting.

Lee Kravitz, a former editor in chief of "Parade" magazine and the founding editor of "React," is currently the board president of Youth Communication.

Kevin Foley has over thirty years' experience in radio and television broadcasting, commercial voice-overs, and audiobook narration. He has recorded over 150 audiobooks, and he won an Earphones Award from "AudioFile" magazine for his narration of "Cognitive Surplus" by Clay Shirky.

"This is an uplifting and truly life-affirming book." ---Hope Edelman, author of The Possibility of Everything