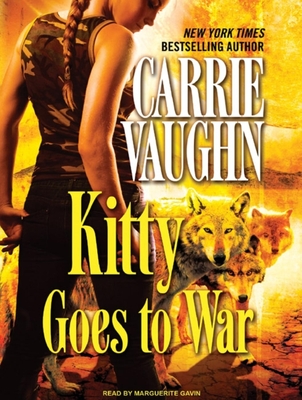 This is book number 8 in the Kitty Norville (Audio) series.

Kitty Norville, Alpha werewolf and host of The Midnight Hour, a radio call-in show, is contacted by a friend at the NIH's Center for the Study of Paranatural Biology. Three Army soldiers recently returned from the war in Afghanistan are being held at Fort Carson in Colorado Springs. They're killer werewolves-and post-traumatic stress has left them unable to control their shape-shifting and unable to interact with people. Kitty agrees to see them, hoping to help by bringing them into her pack. Meanwhile, Kitty gets sued for libel by CEO Harold Franklin after featuring Speedy Mart-his nationwide chain of 24-hour convenience stores with a reputation for attracting supernatural unpleasantness-on her show. Very bad weather is on the horizon.
Carrie Vaughn is the author of the popular Kitty Norville series, and her short stories have appeared in numerous magazines and anthologies.

Marguerite Gavin has recorded over three hundred audiobooks in nearly every genre. A nominee for the prestigious Audie Award, she was won both "AudioFile" Earphones and "Publishers Weekly" Listen-Up Awards. "AudioFile" magazine says "Marguerite Gavin . . . has a sonorous voice, rich and full of emotion."