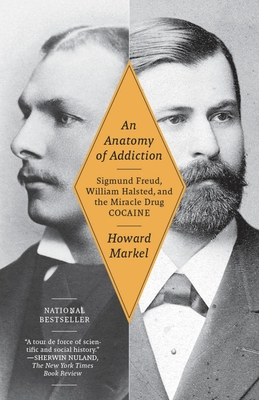 When Freud and Halsted began their experiments with cocaine in the 1880s, neither they, nor their colleagues, had any idea of the drug's potential to dominate and endanger their lives. An Anatomy of Addiction tells the tragic and heroic story of each man, accidentally struck down in his prime by an insidious malady: tragic because of the time, relationships, and health cocaine forced each to squander; heroic in the intense battle each man waged to overcome his affliction. Markel writes of the physical and emotional damage caused by the then-heralded wonder drug, and how each man ultimately changed the world in spite of it—or because of it. One became the father of psychoanalysis; the other, of modern surgery. Here is the full story, long overlooked, told in its rich historical context.

Howard Markel, M.D., Ph.D., is the George E. Wantz Distinguished Professor of the History of Medicine and director of the Center for the History of Medicine at the University of Michigan. His books include Quarantine!, When Germs Travel, and An Anatomy of Addiction. His articles have appeared in The New York Times, The Journal of the American Medical Association, and The New England Journal of Medicine, and he is a frequent contributor to National Public Radio. Markel is a member of the Institute of Medicine of the National Academy of Sciences and lives in Ann Arbor, Michigan.

“A tour de force of scientific and social history, one that helps illuminate a unique period in the long story of medical discovery. . . . Absorbing and thoroughly documented . . . a vivid narrative of two of the most remarkable of the many contributors to our understanding of human biology and function.”
—The New York Times Book Review

“Terrific. . . . This rich, engrossing book reminds us of the strangeness of even heroic destinies.”
—Los Angeles Times

“Markel creates rich portraits of men who shared, as he writes of Freud, a 'particular constellation of bold risk taking, emotional scar tissue, and psychic turmoil.'“
—The New Yorker

“A rich, revelatory new book. . . . [Markel is] a careful writer and a tireless researcher, and as a trained physician himself, Markel is able to pronounce on medical matters with firmness and authority.”
—TIME

“A splendid history . . . [Markel is a] fluent, incisive and often subtly funny writer.”
—The Baltimore Sun

"Compelling and compassionate . . . a book that profoundly demonstrates the complexity and breadth of their genius . . . a richly woven analysis complete with anecdotes, historical research, photos and present-day knowledge about the character of the addictive personality."
—Booklist

“From the dramatic opening scene on the first page to the epilogue, An Anatomy of Addiction is a hugely satisfying read. Howard Markel is physician, historian and wonderful storyteller, and since his tale involves two of the most compelling characters in medicine, I could not put it down—addictive is the word for this terrific book.”
—Abraham Verghese, author of Cutting for Stone

“It’s a fascinating book about fascinating men, but even more interesting for those of us who want a glimpse of modern medicine when it was just starting to develop.”
—The New Republic

“Inspired, entertaining and informative . . . [Markel] tells this fascinating tale in an insightful contemporary book that is both intellectually engaging and exceptionally well written.”
—Journal of the American Medical Association

“A fascinating revelation of conditions prevailing in hospitals and medical circles in the late 19th and 20th centuries.”
—New York Journal of Books

“The best medical histories are the ones that cause the imagination to run riot. A fast-rising master of satisfying this human quest for mind-altering willies is the Michigan medical historian Howard Markel.”
—The Winnipeg Free Press

“With both wit and style, Markel has produced a scrupulously researched, meticulously detailed account of the history of cocaine, as well as the drug dependences of Halsted and Freud.”
—Hopkins Medicine Magazine