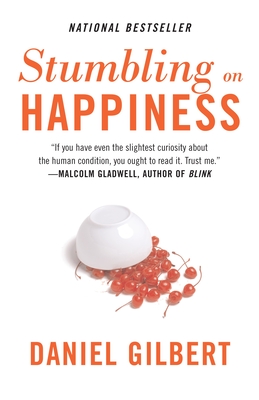 
On Our Shelves Now
Bringing to life scientific research in psychology, cognitive neuroscience, philosophy, and behavioral economics, this bestselling book reveals what scientists have discovered about the uniquely human ability to imagine the future, and about our capacity to predict how much we will like it when we get there.

• Why are lovers quicker to forgive their partners for infidelity than for leaving dirty dishes in the sink?

• Why will sighted people pay more to avoid going blind than blind people will pay to regain their sight?

• Why do dining companions insist on ordering different meals instead of getting what they really want?

• Why do pigeons seem to have such excellent aim; why can’t we remember one song while listening to another; and why does the line at the grocery store always slow down the moment we join it?

In this brilliant, witty, and accessible book, renowned Harvard psychologist Daniel Gilbert describes the foibles of imagination and illusions of foresight that cause each of us to misconceive our tomorrows and misestimate our satisfactions. With penetrating insight and sparkling prose, Gilbert explains why we seem to know so little about the hearts and minds of the people we are about to become.

Daniel Gilbert is Professor of Psychology at Harvard University and Director of the Social Cognition and Emotion Lab. He is generally considered the world's foremost authority in the fields of affective forecasting and the fundamental attribution error. He has published numerous scientific articles and chapters, several short works of fiction, and is the editor of The Handbook of Social Psychology. He has been awarded the Distinguished Scientific Award for an Early Career Contribution to Psychology by the American Psychological Association, fellowships from both the Guggenheim Foundation and the American Philosophical Society, and has been a Fellow at the Center for Advanced Research in the Behavioral Sciences. In 2002, Personality and Social Psychology Bulletin listed Gilbert as one of the fifty most influential social psychologists of the decade, and in 2003 one of his research papers was chosen by the editors of P sychological Inquiry as one of four "modern classics" in social psychology.

“Think you know what makes you happy? This absolutely fantastic book that will shatter your most deeply held convictions about how your own mind works.” —Steven D. Levitt, author of Freakonomics

“A psychological detective story about one of the great mysteries of our lives . . . You ought to read it. Trust me.” —Malcolm Gladwell, author of Blink

“A witty, insightful and superbly entertaining trek through the foibles of human imagination.” —New Scientist

“Gilbert’s book has no subtitle, allowing you to invent your own. I’d call it ‘The Only Truly Useful Book on Psychology I’ve Ever Read.’” —James Pressley, Bloomberg News