Countdown to the Apocalypse: Learn to read the signs that the last days have begun. (Paperback) 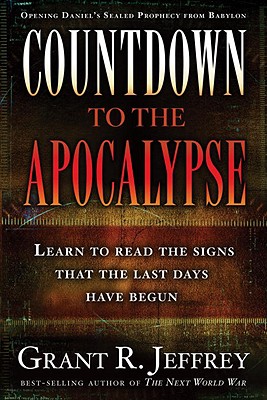 Daniel prophesied the rise of global government in your future

A number of prophets had a glimpse of the future, but God gave only one prophet a precise calendar of the end-times events that will affect the current generation.

Writing more than 2,500 years ago, Daniel described a series of cataclysmic events and the signs that will precede the end times. According to prophecy expert Grant R. Jeffrey, many of the signs that Daniel pointed to are visible in our world today.

Daniel’s vision reveals startling details about the identity of the coming Antichrist, his political career, his death, and his Satanic resurrection. After completing an exhaustive study of Daniel’s prophecies, Dr. Jeffrey presents a detailed description of the Antichrist’s rise as world dictator, the mark of the beast, and the political maneuvering that will set the stage for global government. In light of the Hebrew calendar and the cycle of Jewish festivals, Dr. Jeffrey uncovered precise dates for major apocalyptic events, including a timeline for the Antichrist’s rise to power, the major events of the Tribulation, and the timing of the Battle of Armageddon.

God allowed Daniel to see the world we will soon live in as we approach the time for the return of the Messiah. Now learn exactly what Daniel knew.

Grant R. Jeffrey is an internationally known prophecy expert and author of The New Temple and the Second Coming, The Next World War, and more than twenty other best-selling books. He also is the editor of the Marked Reference Prophecy Study Bible. His popular television program, Bible Prophecy Revealed, airs twice weekly on Trinity Broadcast Network. Dr. Jeffrey earned his Master’s and Ph.D. degrees from Louisiana Baptist University. He and his wife, Kaye, serve in full-time ministry, and live in Toronto.