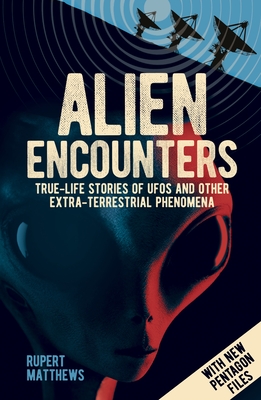 In this compelling and revealing examination, author Rupert Matthews looks afresh at key episodes of alien activity on earth, and sheds light on the many mysterious phenomena associated with it.

From Roswell to Taiz , the book dissects fascinating eyewitness accounts of communication and contact with alien beings, as well as chilling cases of abduction. It also sifts through sinister evidence of government cover-ups. Alien Encounters provides in-depth analysis of the most important encounters, including: - The pilot who saw a formation of alien aircraft
- The Exeter Incident - chased by UFOs in the darkness
- The Socorro Incident - solid evidence of alien activity
- Betty and Barney Hill - abducted on Highway 3 Alien Encounters is a gripping investigation of strange events that continue to spark fierce debate. The Pentagon's decision in 2020 to admit the existence of its UFO division has begun a new era in encounters between humans and extra-terrestrials. Understanding the meanings behind these strange events has never been more important.
Rupert Matthews is a long-established historical writer with numerous books to his name, including Hitler: Military Commander, The Age of the Gladiators, Usurpers and Kingmakers, a biography of the American artist Frederic Remington, and The 20th Century in Pictures, a photographic review of the century. Rupert is married to Joanna and lives in Surrey.