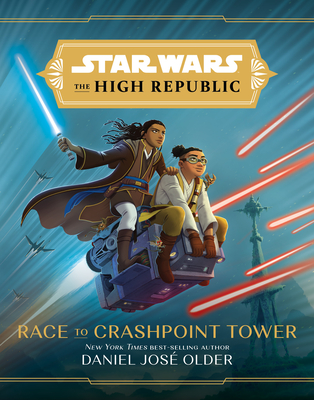 
On Our Shelves Now
Another exciting story in the #1 New York Times best-selling series!

The Republic Fair is coming! Visitors from all over the galaxy are traveling to the planet Valo for a massive, awe-inspiring festival celebrating the Republic. While his fellow Valons prepare for the fair, Jedi Padawan Ram Jomaram is hiding out in his favorite place: a dingy garage filled with mechanical parts and tools. But when a security alarm goes off on the nearby hilltop nicknamed Crashpoint Peak, he ventures out with his trusty droid V-18 to investigate. There he discovers that someone has knocked out Valo’s communications tower—a frightening sign that Valo, and the Republic Fair, are in danger. Sure enough, as Ram races to warn the Jedi, the dreaded Nihil unleash a surprise attack! It’s up to Ram to face down the enemy at Crashpoint Tower and send a call for help to the Republic. Luckily, he’s about to get some assistance from unexpected new friends…

Don't miss all of the Star Wars: The High Republic adventures!
Daniel José Older is the New York Times bestselling author of the Middle Grade historical fantasy series Dactyl Hill Squad, the Bone Street Rumba urban fantasy series, Star Wars: Last Shot, and the award winning Young Adult series the Shadowshaper Cypher, which won the International Latino Book Award and was shortlisted for the Kirkus Prize in Young Readers’ Literature, the Andre Norton Award, the Locus, the Mythopoeic Award, and named one of Esquire’s 80 Books Every Person Should Read.