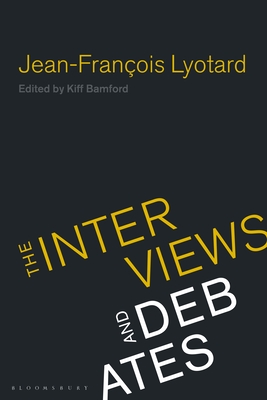 By Jean-Francois Lyotard, Kiff Bamford (Editor)
$30.95
Available to Order - Usually Arrives in Our Store in 4 to 7 Days

Jean-Fran ois Lyotard (1924-1998) was one of the most important French philosophers of the Twentieth Century. His impact has been felt across many disciplines: sociology; cultural studies; art theory and politics. This volume presents a diverse selection of interviews, conversations and debates which relate to the five decades of his working life, both as a political militant, experimental philosopher and teacher. Including hard-to-find interviews and previously untranslated material, this is the first time that interviews with Lyotard have been presented as a collection.

Key concepts from Lyotard's thought - the differend, the postmodern, the immaterial - are debated and discussed across different time periods, prompted by specific contexts and provocations. In addition there are debates with other thinkers, including Emmanuel Levinas and Jacques Derrida, which may be less familiar to an Anglophone audience. These debates and interviews help to contextualise Lyotard, highlighting the importance of Marx, Freud, Kant and Wittgenstein, in addition to the Jewish thought which accompanies the questions of silence, justice and presence that pervades Lyotard's thinking.