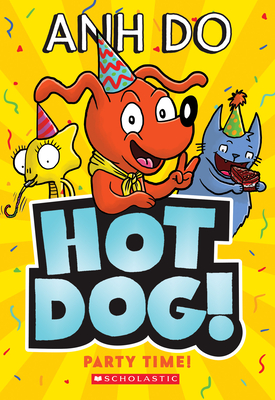 By Anh Do, Dan McGuiness (Illustrator)


Available to Order - Usually Arrives in Our Store in 4 to 7 Days
Meet Hotdog, the wiener dog, and his friends! In this colorful illustrated chapter book series, Anh Do introduces us to a small hero with a big heart.It's Kev's birthday, so Hotdog and Lizzie are throwing him a surprise party! There'll be cake, games, and magic tricks! But will a rude rooster and a cranky donkey ruin the day?
Anh Do is an accomplished writer, actor, producer, and stand-up comedian, as well as a runner-up on Australia's Dancing with the Stars. His award-winning adult autobiography, The Happiest Refugee, is an international bestseller, and he's the author of two bestselling chapter book series, WeirDo and Ninja Kid. He lives in Sydney, Australia.
Dan's love of comics began when he got a job with a local comic shop. It was there that he started to draw comics about his colleagues and the daily happenings in the store. He takes his inspiration from the cartoons and comics that made him laugh as a child. These days, Dan spends his time playing video games, watching cartoons, and creating children's books. PILOT & HUXLEY: THE FIRST ADVENTURE was Dan McGuiness's first book. He lives in North Adelaide, South Australia.