When Affirmative Action Was White: An Untold History of Racial Inequality in Twentieth-Century America (Paperback) 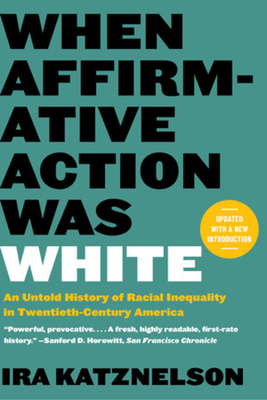 When Affirmative Action Was White: An Untold History of Racial Inequality in Twentieth-Century America (Paperback)

With this explosive analysis, Ira Katznelson fundamentally recast our understanding of twentieth-century American history, demonstrating that the key programs passed during the New Deal and Fair Deal eras were not, as we are so often told, fundamentally equitable or impartial, but discriminatory in the way they deliberately excluded African Americans from benefits. In fact, Katznelson writes, the gap between black and white Americans actually widened following this period, owing, in no small part, to the segregationist designs of southern Democrats. Now featuring a new introduction that situates this saga within the wider context of twentieth- and twenty-first-century history, When Affirmative Action Was White remains, tragically, as salient as ever, providing both a “painful understanding of how politics and race intersect” (Henry Louis Gates Jr.) and a broad justification for continuing affirmative action programs.

Ira Katznelson is Ruggles Professor of Political Science and History at Columbia University and Deputy Director of Columbia World Projects. A former president of the American Political Science Association, he is the author of many celebrated books, including Fear Itself, winner of the Bancroft Prize in History.

Ira Katznelson has made a major contribution to the affirmative action debate…[His] book makes as strong a case as I have ever seen for vigorous action to bring about equal opportunities for African-Americans.
— George M. Frederickson - New York Review of Books

A gem of a book.
— David Oshinsky - The Nation

Katznelson’s explosive analysis provides us with a new and painful understanding of how politics and race intersect.
— Henry Louis Gates Jr.

When Affirmative Action Was White was one of the first books that helped me concretely understand how racism was embedded into federal policy.