Sidecountry: Tales of Death and Life from the Back Roads of Sports (Hardcover) 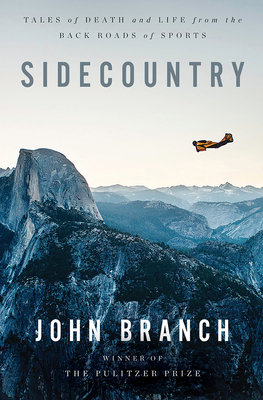 Sidecountry: Tales of Death and Life from the Back Roads of Sports (Hardcover)

Breathtaking tales of climbers and hunters, runners and racers, winners and losers by the Pulitzer Prize-winning reporter.

New York Times reporter John Branch’s riveting, humane pieces about ordinary people doing extraordinary things at the edges of the sporting world have won nearly every major journalism prize. Sidecountry gathers the best of Branch’s work for the first time, featuring 20 of his favorites from the more than 2,000 pieces he has published in the paper.

Branch is renowned for covering the offbeat in the sporting world, from alligator hunting to wingsuit flying. Sidecountry features such classic Branch pieces, including “Snow Fall,” about downhill skiers caught in an avalanche in Washington state, and “Dawn Wall,” about rock climbers trying to scale Yosemite’s famed El Capitan. In other articles, Branch introduces people whose dedication and decency transcend their sporting lives, including a revered football coach rebuilding his tornado-devastated town in Iowa and a girls’ basketball team in Tennessee that plays on despite never winning a game. The book culminates with his moving personal pieces, including “Children of the Cube,” about the surprising drama of Rubik’s Cube competitions as seen through the eyes of Branch’s own sports-hating son, and “The Girl in the No. 8 Jersey,” about a mother killed in the 2017 Las Vegas shooting whose daughter happens to play on Branch’s daughter’s soccer team.

John Branch has been hailed for writing “American portraiture at its best” (Susan Orlean) and for covering sports “the way Lyle Lovett writes country music—a fresh turn on a time-honored pleasure” (Nicholas Dawidoff). Sidecountry is the work of a master reporter at the top of his game.

John Branch is a Pulitzer Prize–winning reporter for the New York Times. He is the best-selling author of Boy on Ice and The Last Cowboys, and has been featured in The Best American Sports Writing. He lives near San Francisco, California.

Branch delivers consistently smart, startling observations—and offers something for every reader, whether or not they’d consider themselves 'sports fans.'
— Publishers Weekly (starred review)

Branch's essays depict ordinary people doing extraordinary things at the fringes of the sporting world. This collection can be enjoyed by a wide range of readers and sports fans.
— Library Journal