The Inevitability of Tragedy: Henry Kissinger and His World (Hardcover) 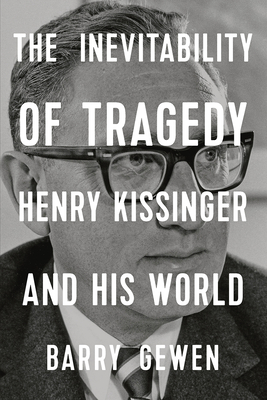 The Inevitability of Tragedy: Henry Kissinger and His World (Hardcover)

A new portrait of Henry Kissinger focusing on the fundamental ideas underlying his policies: Realism, balance of power, and national interest.

Few public officials have provoked such intense controversy as Henry Kissinger. During his time in the Nixon and Ford administrations, he came to be admired and hated in equal measure. Notoriously, he believed that foreign affairs ought to be based primarily on the power relationships of a situation, not simply on ethics. He went so far as to argue that under certain circumstances America had to protect its national interests even if that meant repressing other countries’ attempts at democracy. For this reason, many today on both the right and left dismiss him as a latter-day Machiavelli, ignoring the breadth and complexity of his thought.

With The Inevitability of Tragedy, Barry Gewen corrects this shallow view, presenting the fascinating story of Kissinger’s development as both a strategist and an intellectual and examining his unique role in government through his ideas. This book analyzes his contentious policies in Vietnam and Chile, guided by a fresh understanding of his definition of Realism, the belief that world politics is based on an inevitable, tragic competition for power.

Crucially, Gewen places Kissinger’s pessimistic thought in a European context. He considers how Kissinger was deeply impacted by his experience as a refugee from Nazi Germany, and explores the links between his notions of power and those of his mentor, Hans Morgenthau—the father of Realism—as well as those of two other German-Jewish émigrés who shared his concerns about the weaknesses of democracy: Leo Strauss and Hannah Arendt.

The Inevitability of Tragedy offers a thoughtful perspective on the origins of Kissinger’s sober worldview and argues that a reconsideration of his career is essential at a time when American foreign policy lacks direction.

Barry Gewen, an editor at the New York Times Book Review for thirty years, has written on politics, international affairs, and culture for several publications, including the Times, the New Republic, Dissent, and the National Interest. He lives in New York City.
A sterling, highly readable intellectual biography.... Gewen convincingly argues that a full appreciation of Kissinger’s realist philosophy is now more important than ever.
— Jessica T. Matthews - Foreign Affairs

Meticulously researched, consistently stimulating and deeply insightful.... This beautifully written and engaging gem is an exciting, exhilarating must-read for anyone interested in international relations, American foreign policy or the ideas of Kissinger, whether you agree with him or not.
— Roger Bishop - BookPage

Gewen seeks to escape [a] cartoon depiction of Kissinger, absurd in its Manichaean extremes. He does so successfully with sympathy for his subject, subtlety, good writing and not a little humour.... Gewen tells us that Kissinger is more than a figure out of history, and that we dismiss or ignore him at our peril.
— Christopher Meyer - The Spectator

Barry Gewen’s extraordinary study seeks neither to condemn nor defend Henry Kissinger but to comprehend him. With a keen understanding of the nuances of Cold War politics and diplomacy, from every angle, Gewen cuts to the core of Kissinger’s Realism, haunted by the twentieth century’s lessons that democracy and good intentions can just as easily produce catastrophe as uplift.
— Sean Wilentz, George Henry Davis 1886 Professor of American History, Princeton University

Ingeniously organized, flawlessly argued, this big book moves with the speed of a magazine essay. Its signal point is incontrovertible: that in a messy, shrinking world where little is black and white and America is no longer protected by oceans, Henry Kissinger’s tragic Realism becomes increasingly relevant and increasingly undeniable.
— Robert D. Kaplan, author of The Revenge of Geography and The Coming Anarchy

The Inevitability of Tragedy is an intellectually stimulating and thoughtful examination of competing visions of the world and relations among states. It examines these subjects through the prism of the thinking of Henry Kissinger, one of America’s greatest thinkers and writers on those subjects—albeit one whose views, as Barry Gewen explains vividly, are founded on the grim vantage point associated with the Realist school of thinking. As one who strongly endorses the value of what Gewen describes as Dr. Kissinger’s ‘pessimistic sensibility,’ I found this book to be of enormous value at a time when the tectonic plates of global relations are shifting and call for informed, thoughtful, and realistic foreign policy thinkers and practitioners.

Barry Gewen provides a profound intellectual and philosophical framework for assessing Henry Kissinger’s approach to diplomacy and also for understanding the role that Realism has played in America’s foreign policy. It is a fascinating and deeply researched book.
— Walter Isaacson, author of Kissinger: A Biography