A Molecule Away from Madness: Tales of the Hijacked Brain (Hardcover) 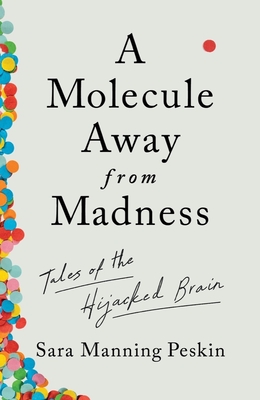 A Molecule Away from Madness: Tales of the Hijacked Brain (Hardcover)

Riveting stories of the brain on the brink, from an acclaimed cognitive neurologist.

Our brains are the most complex machines known to humankind, but they have an Achilles heel: the very molecules that allow us to exist can also sabotage our minds. Here are gripping accounts of unruly molecules and the diseases that form in their wake.

A college student cannot remember if she has eaten breakfast. By dinner, she is strapped to a hospital bed, convinced she is battling zombies. A man planning to propose marriage instead becomes violently enraged, gripped by body spasms so severe that he nearly bites off his own tongue. One after another, poor farmers in South Carolina drop dead from a mysterious epidemic of dementia.

With an intoxicating blend of history and intrigue, Sara Manning Peskin invites readers to play medical detective, tracing each diagnosis from the patient to an ailing nervous system. Along the way, Peskin entertains with tales of the sometimes outlandish, often criticized, and forever devoted scientists who discovered it all.

Peskin never loses sight of the human impact of these conditions. Alzheimer’s Disease is more than the gradual loss of a loved one; it can be a family’s multigenerational curse. The proteins that abound in every cell of our bodies are not simply strings of oxygen, hydrogen, nitrogen, and carbon; they are the building blocks of our personalities and relationships. A Molecule Away from Madness is an unputdownable journey into the deepest mysteries of our brains.

Sara Manning Peskin is an assistant professor of clinical neurology at the University of Pennsylvania. Her writing has appeared in the New York Times, Boston Globe Magazine, and the Philadelphia Inquirer. She lives in Philadelphia, Pennsylvania.
Sara Manning Peskin is remarkably skillful at breaking down complex neuroscience into easily digestible components and explaining the mysteries of the brain with profound elegance. Rarely has a writer been able to depict the devastating consequences of neurologic illness through such poignant patient stories. Like Oliver Sacks before her, she is sure to inspire a generation of future neurologists, neuroscientists, and students of the brain.
— Orly Avitzur, MD, MBA, president of the American Academy of Neurology

Readable and well-researched… with added appeal for anyone with a loved one suffering from brain disease. Fascinating popular science.
— Kirkus

Neurologist Peskin debuts with an impressive account of the search for cures for a number of neurologic diseases including dementia and psychosis...There’s much to savor in this powerful survey.
— Publishers Weekly

Captivating and convincing…should bring hope and confidence to general readers as well as general practitioners, and to the millions living with neurodegenerative illness and their families. An exemplary work.
— Library Journal

Cognitive neurology, medical history, and clinical anecdotes are effectively enlisted in Peskin's outlook for a bright future for the treatment of dementia and other brain disorders.
— Tony Miksanek - Booklist