A Darker Shade of Magic: A Novel (Shades of Magic #1) (Paperback) 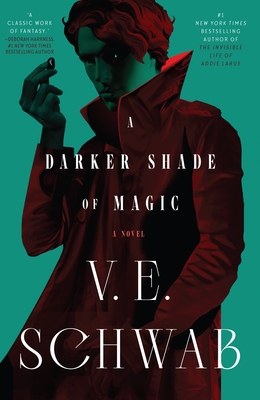 A Darker Shade of Magic: A Novel (Shades of Magic #1) (Paperback)

This is book number 1 in the Shades of Magic series.

From #1 New York Times bestselling author V.E. Schwab, return to the beginning of the phenomenal Shades of Magic series with A Darker Shade of Magic, now in a brand new trade paperback edition

Kell is one of the last Antari—magicians with a rare, coveted ability to travel between parallel Londons; Red, Grey, White, and, once upon a time, Black.

Kell was raised in Arnes—Red London—and officially serves the Maresh Empire as an ambassador, traveling between the frequent bloody regime changes in White London and the court of George III in the dullest of Londons, the one without any magic left to see.

Unofficially, Kell is a smuggler, servicing people willing to pay for even the smallest glimpses of a world they'll never see. It's a defiant hobby with dangerous consequences, which Kell is now seeing firsthand.

After an exchange goes awry, Kell escapes to Grey London and runs into Delilah Bard, a cut-purse with lofty aspirations. She first robs him, then saves him from a deadly enemy, and finally forces Kell to spirit her to another world for a proper adventure.

Now perilous magic is afoot, and treachery lurks at every turn. To save all of the worlds, they'll first need to stay alive.

Other books by V. E. Schwab

The Invisible Life of Addie LaRue

VICTORIA “V.E.” SCHWAB is the #1 New York Times bestselling author of more than a dozen books, including the acclaimed novel The Invisible Life of Addie LaRue, the Shades of Magic series, Villains series, This Savage Song, and Our Dark Duet. Her work has received critical acclaim, been featured in the New York Times, Entertainment Weekly, Washington Post and more, translated into more than a dozen languages, and has been optioned for television and film. When she’s not haunting Paris streets or trudging up English hillsides, she lives in Edinburgh, Scotland and is usually tucked in the corner of a coffee shop, dreaming up monsters.

"Feels like a priceless object, brought from another, better world of fantasy books...kept me engrossed by its story every bit as much as I was fascinated by its complex, multilayered world."--io9.com

"Has all the hallmarks of a classic work of fantasy...This is a book to treasure." -Deborah Harkness, New York Times bestselling author of The All Souls trilogy