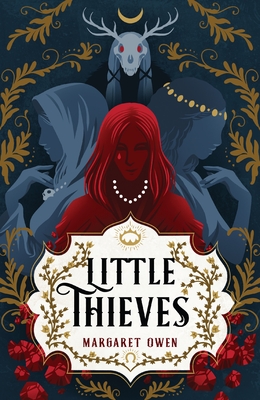 “I truly haven’t loved a book this much in a long time. I already want to jump back in to re-read this sassy, heartfelt, whimsical heist adventure. And it’s a standalone? Just take my heart, Margaret Owen.”
— Claire Phelan, Third Place Books, Lake Forest Park, WA

A scrappy maid must outsmart both palace nobles and Low Gods in a new YA fantasy by Margaret Owen, author of the Merciful Crow series.

Once upon a time, there was a horrible girl...

Vanja Schmidt knows that no gift is freely given, not even a mother’s love—and she’s on the hook for one hell of a debt. Vanja, the adopted goddaughter of Death and Fortune, was Princess Gisele's dutiful servant up until a year ago. That was when Vanja’s otherworldly mothers demanded a terrible price for their care, and Vanja decided to steal her future back… by stealing Gisele’s life for herself.

The real Gisele is left a penniless nobody while Vanja uses an enchanted string of pearls to take her place. Now, Vanja leads a lonely but lucrative double life as princess and jewel thief, charming nobility while emptying their coffers to fund her great escape. Then, one heist away from freedom, Vanja crosses the wrong god and is cursed to an untimely end: turning into jewels, stone by stone, for her greed.

Vanja has just two weeks to figure out how to break her curse and make her getaway. And with a feral guardian half-god, Gisele’s sinister fiancé, and an overeager junior detective on Vanja’s tail, she’ll have to pull the biggest grift yet to save her own life.

In "Little Thieves", Margaret Owen, author of The Merciful Crow series, crafts a delightfully irreverent retelling of “The Goose Girl” about stolen lives, thorny truths, and the wicked girls at the heart of both.

Margaret Owen was born and raised at the end of the Oregon Trail and has worked in everything from thrift stores to presidential campaigns. The common thread between every job can be summed up as: lessons were learned. She now spends her days writing and negotiating a long-term hostage situation with her two monstrous cats. She is the author of the Merciful Crow series. In her free time, she enjoys exploring ill-advised travel destinations and raising money for social justice nonprofits through her illustrations. She resides in Seattle, Washington.

"One of the most exciting, exceptionally crafted fantasy debuts I've ever read. I did not want to leave this world! Absolutely breathtaking." —Claire Legrand, New York Times–bestselling author of Furyborn

"Packed to the teeth with fresh worldbuilding and righteous fury . . . It's a ride that is wildly fun." —Emily A. Duncan, New York Times–bestselling author of Wicked Saints

"A passionate blend of adventure and intrigue wrapped around strong worldbuilding . . . Memorable and filled with diverse characters with fluid sexualities and identities." —Publishers Weekly, Starred Review

"Elevated by a fresh dialect-tinged voice and creative world-building that calls to mind issues of today." —Booklist