Divided We Fall: America's Secession Threat and How to Restore Our Nation (Paperback) 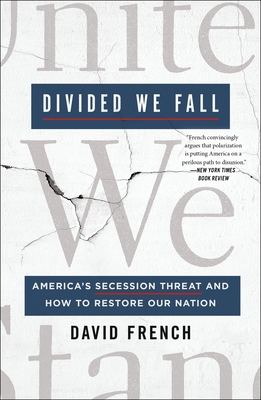 Divided We Fall: America's Secession Threat and How to Restore Our Nation (Paperback)

Now in paperback: David French warns of the potential dangers to the country—and the world—if we don’t summon the courage to reconcile our political differences.

Two decades into the 21st Century, the U.S. is less united than at any time in our history since the Civil War. We are more diverse in our beliefs and culture than ever before. But red and blue states, secular and religious groups, liberal and conservative idealists, and Republican and Democratic representatives all have one thing in common: each believes their distinct cultures and liberties are being threatened by an escalating violent opposition. This polarized tribalism, espoused by the loudest, angriest fringe extremists on both the left and the right, dismisses dialogue as appeasement; if left unchecked, it could very well lead to secession.

An engaging mix of cutting edge research and fair-minded analysis, Divided We Fall is an unblinking look at the true dimensions and dangers of this widening ideological gap, and what could happen if we don't take steps toward bridging it. French reveals chilling, plausible scenarios of how the United States could fracture into regions that will not only weaken the country but destabilize the world.

But our future is not written in stone. By implementing James Madison’s vision of pluralism—that all people have the right to form communities representing their personal values—we can prevent oppressive factions from seizing absolute power and instead maintain everyone’s beliefs and identities across all fifty states.

Reestablishing national unity will require the bravery to commit ourselves to embracing qualities of kindness, decency, and grace towards those we disagree with ideologically. French calls on all of us to demonstrate true tolerance so we can heal the American divide. If we want to remain united, we must learn to stand together again.

DAVID FRENCH is a senior editor of The Dispatch, a columnist at Time, a former senior writer at National Review, an Iraq War veteran, and the co-author of several books, including Rise of ISIS: A Threat We Can’t Ignore, a New York Times bestseller. He lives in Tennessee.

"French makes a powerful case that the country could be heading toward dissolution—not so much a hot civil war as a bitter domestic cold war leading to an acrimonious divorce through secession." —Jonah Goldberg, The Dispatch

"World Magazine's 'Understanding America Book of the Year.' The United States is more polarized than at any time since the Civil War. The highly discussed book that best recognizes that—and proposes what to do—is David French’s Divided We Fall: America’s Secession Threat and How To Restore Our Nation." —World Magazine

"French laments conspiracy-minded rhetoric from both the right and the left in this incisive examination of contemporary political polarization. This well-informed and often moving account provides an antidote to the ills of political partisanship." —Publishers Weekly

"[French is] not calling on us to agree—just to continue disagreeing without destroying ourselves." —Carlos Lozada, Washington Post

"French presents a vision for how the country can come together again and embrace national unity." —Mackenzie Dawson, New York Post

"In a season of sharp contrasts between red and blue and with a major election looming, French’s book is a timely and necessary read. Even those who don’t quite believe in the imminent danger of secession will appreciate his call to renewed courage and character. He offers a timeless reminder of the importance of justice, mercy and humility toward one another—imperfect people in an imperfect world, still hoping for a more perfect union." —Terri Barnes, Stars and Stripes

"French's book is important because he has his eyes fixed on the real or most fundamental problem confronting American democracy, and because he doesn't allow himself to get sucked into or distracted by the more superficial conflicts that feed into that problem and make it worse...deserves to be widely read and debated among those who would help America avoid the worst of its many possible futures." —Damon Linker, The Week