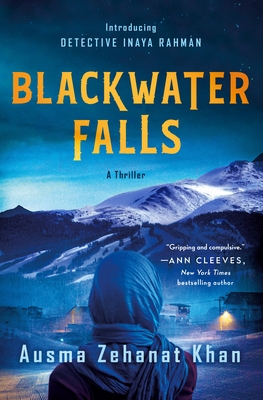 This is book number 1 in the Blackwater Falls Series series.

“A gripping and compulsive mystery, but much more than that: an exploration of faith, prejudice and fear of the unknown.” —Ann Cleeves, New York Times bestselling author of the Vera, Shetland and Two Rivers series

Girls from immigrant communities have been disappearing for months in the Colorado town of Blackwater Falls, but the local sheriff is slow to act and the fates of the missing girls largely ignored. At last, the calls for justice become too loud to ignore when the body of a star student and refugee--the Syrian teenager Razan Elkader--is positioned deliberately in a mosque.

Detective Inaya Rahman and Lieutenant Waqas Seif of the Denver Police are recruited to solve Razan’s murder, and quickly uncover a link to other missing and murdered girls. But as Inaya gets closer to the truth, Seif finds ways to obstruct the investigation. Inaya may be drawn to him, but she is wary of his motives: he may be covering up the crimes of their boss, whose connections in Blackwater run deep.

Inaya turns to her female colleagues, attorney Areesha Adams and Detective Catalina Hernandez, for help in finding the truth. The three have bonded through their experiences as members of vulnerable groups and now they must work together to expose the conspiracy behind the murders before another girl disappears.

Delving deep into racial tensions, and police corruption and violence, Blackwater Falls examines a series of crimes within the context of contemporary American politics with compassion and searing insight.

AUSMA ZEHANAT KHAN holds a Ph.D. in international human rights law with a specialization in military intervention and war crimes in the Balkans. She is the author of the award-winning Esa Khattak and Rachel Getty mystery series, which begins with The Unquiet Dead, as well as the critically acclaimed Khorasan Archives fantasy series. Her new crime series featuring Detective Inaya Rahman begins with Blackwater Falls. She is also a contributor to the anthologies Private Investigations, Sword Stone Table, and The Perfect Crime, and the former Editor-in-Chief of Muslim Girl magazine. A British-born Canadian and former adjunct law professor, Khan now lives in Colorado with her husband.

"Impressive. . . Khan is far too good to let the narrative devolve into a cliched showdown between immigrants and xenophobic locals. And Inaya is a fabulous character—shrewd and stalwart, yes, but also complicated and fully fleshed-out, as is the marginalized Syrian community of Blackwater Falls"—New York Times Book Review, "Editor's Choice"

“In a violent, divided town, Inaya is our moral center, with an unstinting gaze. Blackwater Falls is a tense and propulsive read from the start all the way through to its surprising, piercingly sad final chapter."—Washington Post

"Stunning . . . Kahn brilliantly depicts the complexities of her characters and the tensions of a multicultural American community struggling with bias, fear, and corruption. At once suspenseful, moving, and thought-provoking, this is not to be missed."—Publishers Weekly (Starred)

"Enthralling and intense, the plot unfurls a perceptive exploration of faith, race, gender roles, immigration, intolerance, and community. This is a masterfully crafted thriller that doesn't disappoint from beginning to end."—Booklist (Starred)

“Readers who enjoy a meatier mystery that grapples with contemporary themes, along the lines of a James Lee Burke thriller, will find much to admire.”—Library Journal

“[The] investigation is compelling, but the story’s most interesting aspect is its deft exploration of the ways that ideas of race and justice intersect and the specific pressures and problems faced by Muslim American women.”—Paste Magazine

“Not just a thriller but a story of faith. In a distinctly different work, Khan explores a world unknown to many readers of mysteries.”—The Denver Post

“Inaya is a fascinating character whose role as a police detective often is at odds with her mother’s expectations for her.”—The South Florida Sun-Sentinel

"An extremely timely and original thriller."—Buzzfeed, "20 New Mystery and Thriller Novels Coming Out This Fall"

“Inaya Rahman is leading the fiercest new detective series on the block.”—Ms. Magazine, “November 2022 Reads for the Rest of Us”

“Khan’s fast-moving but thoughtful series debut goes far beyond newcomers-vs.-racists tropes to look at real life in a changing town. Rahman is a tough, lovable, and often funny protagonist who will appeal to fans of Joanna Schaffhausen’s Annalisa Vega.”—First Clue

"A complex and timely novel…Inaya is a well-portrayed character. The themes of violence and social justice resonate in Blackwater Falls and make for a compelling read.”—Mystery & Suspense Magazine

“Clear your calendar—there's a new crime series from Ausma Zehanat Khan! Blackwater Falls is the first in what is sure to be an acclaimed and long-running series—do not miss this!” —Hank Phillippi Ryan, USA Today bestselling author of The First To Lie

“Blackwater Falls is a triumph, bringing to life an intricate mystery that features diverse characters with differing interpretations of justice. This is an exceptional novel that engaged both my head and heart.” —Hilary Davidson, bestselling author of Her Last Breath

“Ausma Zehanat Khan’s Blackwater Falls is a novel you will read in one sitting; a compelling, tense thriller from one of the most exciting, authentic voices in suspense fiction. This masterful series debut will leave you impatiently waiting for the next installment. —Jennifer Hillier, bestselling author of Things We Do in the Dark

“Poignant and powerful . . . Blackwater Falls is a page-turning, pulse-racing headlong jump into a complicated, nuanced community—one that Detective Inaya Rahman and her colleagues are determined to shake up. An astonishing, moving story. I can't wait for more!”—Uzma Jalaluddin, bestselling author of Hana Khan Carries On

“With multi-faceted characters you’ll cheer for, and a taut, propulsive storyline Blackwater Falls is as surprising as it is evocative. This is crime fiction at its absolute finest.” —Hannah Mary McKinnon, internationally bestselling author of Never Coming Home

"This book opens with a bang and doesn't let up. This is definitely one of the reads of the year."—Aunt Agatha's