The Book Collectors: A Band of Syrian Rebels and the Stories That Carried Them Through a War (Paperback) 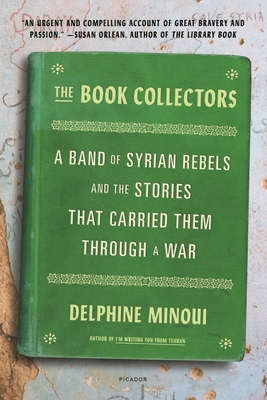 The Book Collectors: A Band of Syrian Rebels and the Stories That Carried Them Through a War (Paperback)

A BEST BOOK OF THE YEAR: NPR

"An urgent and compelling account of great bravery and passion." —Susan Orlean

Award-winning journalist Delphine Minoui recounts the true story of a band of young rebels, a besieged Syrian town, and an underground library built from the rubble of war

Reading is an act of resistance.

Daraya is a town outside Damascus, the very spot where the Syrian Civil War began. Long a site of peaceful
resistance to the Assad regimes, Daraya fell under siege in 2012. For four years, no one entered or left, and aid was blocked. Every single day, bombs fell on this place—a place of homes and families, schools and children, now emptied and broken into bits.

And then a group searching for survivors stumbled upon a cache of books in the rubble. In a week, they had six thousand volumes; in a month, fifteen thousand. A sanctuary was born: a library where people could escape the blockade, a paper fortress to protect their humanity.

The library offered a marvelous range of books—from Arabic poetry to American self-help, Shakespearean plays to stories of war in other times and places. The visitors shared photos and tales of their lives before the war, planned how to build a democracy, and tended the roots of their community despite shell-shocked soil.

In the midst of the siege, the journalist Delphine Minoui tracked down one of the library’s founders, twenty-three-year-old Ahmad. Over text messages, WhatsApp, and Facebook, Minoui came to know the young men who gathered in the library, exchanged ideas, learned English, and imagined how to shape the future, even as bombs kept falling from above. By telling their stories, Minoui makes a far-off, complicated war immediate and reveals these young men to be everyday heroes as inspiring as the books they read. The Book Collectors is a testament to their bravery and a celebration of the power of words.

Delphine Minoui, a recipient of the Albert-Londres Prize for her reporting on Iraq and Iran, is a journalist and Middle East correspondent for Le Figaro. She is the author of several books in French. I'm Writing You from Tehran is her first book translated into English.

Born in Paris in 1974 to a French mother and an Iranian father, she now lives in Istanbul.

Lara Vergnaud is a translator of prose, creative nonfiction, and scholarly works from the French. She is the recipient of two PEN/Heim Translation Fund Grants and a French Voices Grand Prize, and has been nominated for the National Translation Award. She lives in Washington, DC.

“This is an urgent and compelling account of great bravery and passion. Delphine Minoui has crafted a book that champions books and the individuals who risk everything to preserve them.”
—Susan Orlean, author of The Library Book

"[An] incredible chronicle . . . The book tells the kind of story that often gets buried beneath images of violence."
—Corinne Segal, Lit Hub

"An extraordinary story about the passion for books in war-torn Syria . . . Shelve this one next to Reading Lolita in Tehran. Heartbreaking, inspiring, and beautifully told."
—Kirkus, starred review

“I was so moved by this account of the young rebels of Daraya, Syria, who, in the midst of a four-year blockade by Assad’s forces (including having poison gas used against them), set up a library with books rescued from bombed and destroyed buildings, an underground (in both senses of the word) library that grew to more than 15,000 titles, ranging from Stephen Covey’s The 7 Habits of Highly Successful People to Paulo Coelho’s The Alchemist, and everything in between. In this testimony to the power of reading, these lines stood out: ‘Books are their best way to escape the war, if only temporarily. A melody of words against the dirge of bombs.’”
—Nancy Pearl, author of Book Lust and George and Lizzie

"The Book Collectors hurt me like never before, because I hold this country I have never visited, my country, close to my heart . . . Readers discover how the magic of books kept the rebels motivated, hopeful, sane and, most importantly, alive. From informal classes and impromptu dances to an epistolary relationship, we discover how a cathedral of paper became a sanctuary, a home for the future and a temple of hope . . . Honest and brutal, it opens your eyes to the nightmares of war but also to the glory of books and reading."
—Bader Saab, Patheos

"This compassionate portrayal of an engaging group of rebels serves as a testament to both the resilience of the human spirit and to the power of story. Highly recommended for those interested in current events, Middle East history and politics, and personal accounts of war."
—Library Journal, starred review

"Readers will be moved by the plight of the people of Daraya, and inspired by their faith in the power of books to give information, release, and hope."
—Booklist, starred review

"[The Book Collectors] provides depth and heart to a story both inspiring and remarkable."
—Jefferson City News Tribune

“Absolutely essential reading. With masterful storytelling, Delphine Minoui recounts the struggle and tenacity of the youth of Daraya who, in the shadow of a merciless war, rescue books from the rubble and bring to life a library unlike any other. Each page connects us to their strength and their spirit as well as to the power of words in a crumbling world. This book is an ode to resistance, to freedom, and to life.”
—Négar Djavadi, author of Disoriental

"After reading this book, there can be no doubt. Not about the power of words versus the words of those in power. Not about the importance of literature in times of despair. And not about the strength of Delphine Minoui's pen, as she honors the act of resistance against the disaster of war."
—Atiq Rahimi, author of A Curse on Dostoevsky