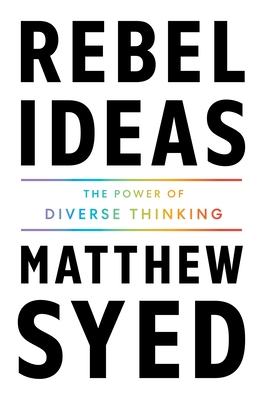 From international bestselling author Matthew Syed comes Rebel Ideas, a book about the power of teamwork and creative problem-solving, and how the best ideas are born.

Ideas are everywhere, but those with the greatest problem-solving, business-transforming, and life-changing potential are often hard to identify. Even when we recognize good ideas, applying them to everyday obstacles—whether in the workplace, our homes, or our civic institutions—can seem insurmountable. According to Matthew Syed, it doesn't have to be this way.

In Rebel Ideas, Syed argues that our brainpower as individuals isn't enough. To tackle problems from climate change to economic decline, we'll need to employ the power of "cognitive diversity." Drawing on psychology, genetics, and beyond, Syed uses real-world scenarios including the failings of the CIA before 9/11 and a communication disaster at the peak of Mount Everest to introduce us to the true power of thinking differently.

Rebel Ideas will strengthen any kind of team, while including advice on how, as individuals, we can embrace the potential of an "outsider mind-set" as our greatest asset.

Matthew Syed is the Sunday Times bestselling author of Black Box Thinking, Bounce, and The Greatest. He writes an award-winning newspaper column in The Times and is the host of the hugely successful BBC podcast Flintoff, Savage and the Ping Pong Guy.

“A master of the genre”—The Times

“Striking…As Mr. Syed writes, the willingness to share knowledge pays off in a world of complexity.” - The Economist

“A gripping read, full of intelligence and perspective.” - James Dyson

“On a vital and still-overlooked topic, Matthew Syed has assembled a compelling base of
evidence….A stunning achievement." - Tim Harford, author of The Undercover Economist

“A stirring call to redefine failure…Black Box Thinking will forever change the way you think about screwing up.” - Daniel Pink, author of Drive and To Sell Is Human


“Blasts through the stubborn idea that ‘talent’ is an innate genetic gift possessed only by the lucky few….A fresh perspective.” - NPR

“The most important book I’ve read over the past six months.” - Peter Orszag, economist, in The New York Times