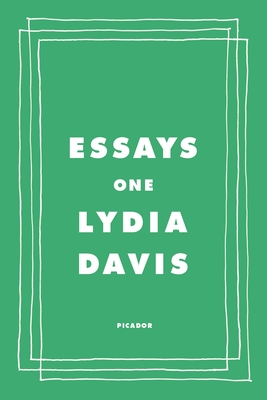 Lydia Davis is a writer whose originality, influence, and wit are beyond compare. Jonathan Franzen has called her “a magician of self-consciousness,” while Rick Moody hails her as "the best prose stylist in America." And for Claire Messud, “Davis's signal gift is to make us feel alive.”

Best known for her masterful short stories and translations, Davis’s gifts extend equally to her nonfiction. In Essays One, Davis has, for the first time, gathered a selection of essays, commentaries, and lectures composed over the past five decades.

In this first of two volumes, her subjects range from her earliest influences to her favorite short stories, from John Ashbery’s translation of Rimbaud to Alan Cote’s painting, and from the Shepherd’s Psalm to early tourist photographs. On display is the development and range of one of the sharpest, most capacious minds writing today.

Lydia Davis is the author of Essays One, a collection of essays on writing, reading, art, memory, and the Bible. She is also the author of The End of the Story: A Novel and many story collections, including Varieties of Disturbance, a finalist for the 2007 National Book Award for Fiction; Can’t and Won’t (2014); and The Collected Stories of Lydia Davis, described by James Wood in The New Yorker as “a grand cumulative achievement.” Davis is also the acclaimed translator of Swann’s Way and Madame Bovary, both awarded the French-American Foundation Translation Prize, and of many other works of literature. She has been named both a Chevalier and an Officier of the Order of Arts and Letters by the French government, and in 2020 she received the PEN/Malamud Award for Excellence in the Short Story.

“[Davis] is our Vermeer, patiently observing and chronicling daily life but from angles odd and askew. . . These pieces exalt clear language and the complicated work of looking and seeing. . . Davis takes pure pleasure in the muscular act of looking, and invites us to look alongside her.” —Parul Sehgal, The New York Times

"She’s so deeply cerebral it’s perhaps counterintuitive that Davis is a companionable presence. She’s erudite, with catholic interests, and earnest but not humorless. This is the kind of book you could read alone in a restaurant and feel you’re lost in a stimulating conversation." —Rumaan Alam, The New Republic

“The first in a planned two-volume collection of the nonfiction of short story author Davis (Samuel Johnson Is Indignant) proves a cornucopia of illuminating and timeless observations on literature, art, and the craft of writing . . . Fans of Davis’s unfailingly clever work should add this volume to their collection, and creative writers of every genre should take the opportunity to learn from a legend.” —Publishers Weekly (Starred Review)

"One gets the impression that even the most fleeting of pieces in “Essays One,” such as a few paragraphs about her favorite short stories, written for a British tabloid, has been given the precise and playful Lydia Davis treatment: 'Subtly, or less subtly, you always want to surprise a reader.'"— Brian Dillon, The New York Times Book Review

“Davis, an innovative fiction writer, is also an erudite essayist, critic and translator, with an ever-questing mind evident in these 33 essays . . . An essential literary companion.” —Jane Ciabattari, BBC

"Lydia Davis is one of those rare cases: an ambidextrous author who is just as capable of bowling a reader over with a short story as she is with an essay." —Malcolm Forbes, Star Tribune

"Lydia Davis is immensely learned; that is clear not only from her translation work but also from her distinguished discussions of the works she has translated. But in much of her nonfiction, she is also a master of the energies that drive her fiction, with its plain style, irony, sensitivity, and elegantly subdued power." —Sandra M. Gilbert, The American Scholar

"Davis is putting her more than 30 years of experience into a selection of essays on the craft of reading and writing; the first of the two-volume set comes out this fall. Don't expect run-of-the-mill advice like "show don't tell" here, though; Davis has made a career out of breaking the established rules . . ." —The Week