The Book of Lost Saints: A Cuban American Family Saga of Love, Betrayal, and Revolution (Paperback) 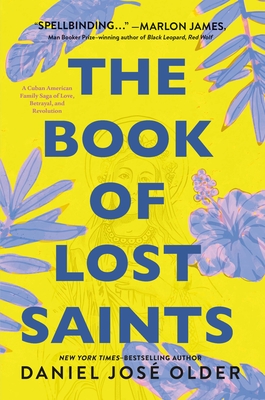 The Book of Lost Saints: A Cuban American Family Saga of Love, Betrayal, and Revolution (Paperback)

Marisol vanished during the Cuban Revolution, disappearing with hardly a trace. Now, shaped by atrocities long-forgotten, her tenacious spirit visits her nephew, Ramón, in modern-day New Jersey. Her hope: that her presence will prompt him to unearth their painful family history.

Ramón launches a haphazard investigation into the story of his ancestor, unaware of the forces driving him on his search. Along the way, he falls in love, faces a run-in with a murderous gangster, and uncovers the lives of the lost saints who helped Marisol during her imprisonment.

Uplifting and evocative, The Book of Lost Saints is a haunting meditation on family, forgiveness, and the violent struggle to be free.

Daniel José Older is the New York Times-bestselling author of The Book of Lost Saints, the young adult series Shadowshaper Cypher, the Bone Street Rumba urban fantasy series, the middle grade historical fantasy series Dactyl Hill Squad, and Star Wars: Last Shot. He won the International Latino Book Award and has been nominated for the Kirkus Prize, the Mythopoeic Award, the Locus Award, the Andre Norton Award, and the World Fantasy Award. Shadowshaper was named one of Esquire’s 80 Books Every Person Should Read. You can find his thoughts on writing, read dispatches from his decade-long career as a New York City paramedic, and hear his music on his website, on YouTube, and on Twitter.

“Older’s writing is at once clear-eyed, lovely, and fascinating. This book marches right into the revolution in a way that is eerily timeless and timely. Wow!” —Jacqueline Woodson, bestselling, award-winning author of Brown Girl Dreaming and 2020 MacArthur Fellow

"Older's masterwork... should launch him into the company of American literary greats... Epic and intimate, conjuring laughter on one page, tears on the next." —Tananarive Due, American Book Award-winning author of The Living Blood and Ghost Summer

"A moving, startling, boldly drawn family saga that is equal parts mystery and ghost story, with details sharp enough to cut and characters who surprise at every turn." —Leigh Bardugo, worldwide bestselling author of Ninth House and the Grishaverse novels

"Thoroughly transportive... This moving story of family and freedom is sure to captivate readers." —Publishers Weekly, starred review

"A gritty, compelling look at love and war and the ways past actions reverberate down through the generations." —Shelf Awareness

"A thoughtful, intense and resonant family saga... unforgettable and well worth your time." —Alex Segura, acclaimed author of Blackout and Dangerous End

"In Older's stories, the dead are as much a part of the living... Older's love for storytelling comes through on every page." —Roxane Gay, New York Times-bestselling author of Bad Feminist and Hunger

"This is the beauty and magic of Older's writing—he leaves us openmouthed and speechless, asking 'What just happened to me?'" —Jacqueline Woodson, New York Times-bestselling author of Another Brooklyn

"The world Older builds is familiar and alien, and it's so vividly imagined and rendered that the reader believes the contradictions, embraces them." —Jesmyn Ward, two-time National Book Award-winning author of Sing, Unburied, Sing

"Daniel José Older is here to save your soul... A fabulous talent, one who mixes the spectral and the intellectual with skill." —Victor LaValle, award-winning author of The Changeling

"Simply put, Daniel José Older has one of the most refreshing voices in genre fiction today." —Saladin Ahmed, Hugo Award-nominated author of Throne of the Crescent Moon