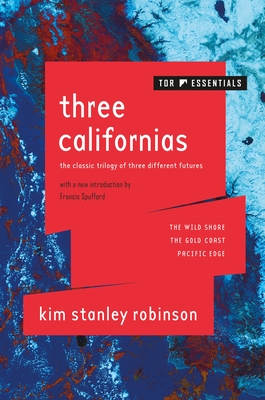 Before Kim Stanley Robinson terraformed Mars, he wrote three science fiction novels set in Orange County, California, where he grew up. These alternate futures—one a post-apocalypse, one an if-this-goes-on future reminiscent of Philip K. Dick, and one an ecological utopia—form a whole that illuminates, enchants, and inspires--collected here as Three Californias.

What if... there was a limited nuclear war that left the United States blockaded, fragmented, the few survivors living in the ruins of a once-great nation?

What if... this goes on, and technology continues to accelerate, and power continues to be consolidated into corporate culture, a developer’s dream world gone mad: an endless sprawl of condos, freeways, and malls, and designer drugs?

What if... a revolution happens, and the US addresses climate change in a responsible way. Is a future green Utopia all that great when you’re young and in love?

“[Robinson] invites us to share his characters’ intensely personal, intensely local attachment to what they have. The result may shame you into entertaining new hope for the future.”
—The New York Times on Pacific Edge

KIM STANLEY ROBINSON is an American science fiction writer. He is the author of more than 20 books, including the international bestselling Mars trilogy: Red Mars, Green Mars, Blue Mars, and more recently Red Moon, New York 2140, and 2312, which was a New York Times bestseller nominated for all seven of the major science fiction awards—a first for any book. 2008 he was named a “Hero of the Environment” by Time magazine, and he works with the Sierra Nevada Research Institute, the Clarion Writers’ Workshop, and UC San Diego’s Arthur C. Clarke Center for Human Imagination. He has won the Hugo, Nebula, Locus, and World Fantasy awards. In 2016 he was given the Heinlein Award for lifetime achievement in science fiction, and asteroid 72432 was named “Kimrobinson.” In 2017 he was given the Arthur C. Clarke Award for Imagination in Service to Society.

Francis Spufford is the author of several highly praised books of nonfiction, including his debut, I May Be Some Time, which won the Writers’ Guild Award for Best Nonfiction Book of 1996, the Banff Mountain Book Prize, and a Somerset Maugham Award. It was followed by The Child That Books Built, Backroom Boys, Red Plenty (translated into nine languages), and Unapologetic. His first novel, Golden Hill, won the Costa First Novel Award. In 2007 he was elected a Fellow of the Royal Society of Literature. He teaches writing at Goldsmiths College and lives near Cambridge.

“This rich fable is warm but excoriatingly honest and connects with the vulnerable cynicism so many of us feel about our political lives...It offers us something more precious even than gold: pride in being an American.”—Philadelphia Inquirer

The Gold Coast
"In this novel, Kim Stanley Robinson illuminates the selfishness and folly of the twenty-first century better than anyone actually living in the twenty first century is ever likely to.”—Gene Wolfe

“It is a rich, brave book.”—John Clute, The Washington Post Book World

“What a bold, manic, wonderful book this is!”—Los Angeles Times

“Like light focused into a coherent beam, The Gold Coast brilliantly illuminates the craziness of technology out of control.”—Interzone

“Readers who seldom touch science fiction will enjoy it and certainly not find it disorienting.”—The Philadelphia Inquirer

“[Robinson] invites us to share his characters' intensely personal, intensely local attachment to what they have. The result is a bittersweet utopia that may shame you into entertaining new hope for the future.”—The New York Times Book Review