The Ten Year War: Obamacare and the Unfinished Crusade for Universal Coverage (Hardcover) 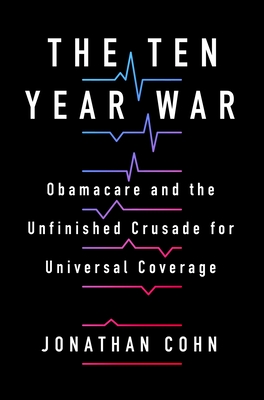 The Ten Year War: Obamacare and the Unfinished Crusade for Universal Coverage (Hardcover)

Jonathan Cohn's The Ten Year War is the definitive account of the battle over Obamacare, based on interviews with sources who were in the room, from one of the nation's foremost healthcare journalists.

The Affordable Care Act, better known as “Obamacare,” was the most sweeping and consequential piece of legislation of the last half century. It has touched nearly every American in one way or another, for better or worse, and become the defining political fight of our time.

In The Ten Year War, veteran journalist Jonathan Cohn offers the compelling, authoritative history of how the law came to be, why it looks like it does, and what it’s meant for average Americans. Drawn from hundreds of hours of interviews, plus private diaries, emails and memos, The Ten Year War takes readers to Capitol Hill and to town hall meetings, inside the West Wing and, eventually, into Trump Tower, as the nation's most powerful leaders try to reconcile pragmatism and idealism, self-interest and the public good, and ultimately two very different visions for what the country should look like.

At the heart of the book is the decades-old argument over what’s wrong with American health care and how to fix it. But the battle over healthcare was always about more than policy. The Ten Year War offers a deeper examination of how our governing institutions, the media and the two parties have evolved, and the dysfunction those changes have left in their wake.

JONATHAN COHN is a senior national correspondent at HuffPost, where he covers politics and policy. A former senior editor at the New Republic, he has written for the New York Times, Atlantic, and Self, among others. He has won several awards and was called “one of the nation's leading experts on health policy” by the Washington Post. A graduate of Harvard, Jonathan grew up in Florida and lived for years in the Boston area before moving to Ann Arbor, Michigan, where he lives with his family.

“Insightful… [The Ten Year War] takes its well-earned place next to Haynes Johnson and David S. Broder’s account of HillaryCare, The System, as must-reads for anyone wanting to understand how the mean-spirited but occasionally uplifting politics of healthcare played out in the capital at crucial turning points in recent history.” --Washington Monthly

“Informed and nuanced, not breathless...Cohn aims at both policy wonks and political junkies. Laced with interviews and quotes from both sides of the aisle, his book is definitely newsworthy.” --The Guardian

“An engaging, highly readable narrative that makes arcane issues accessible...His own bias in favor of universal coverage is explicit, but he treats fairly the philosophical and economic arguments of the opposing view.” --Foreign Affairs

"With writing that is lively, engaging, knowledgeable without being scholarly, detailed without being pedantic, Cohn is an exemplar of investigative, expository journalism at its best." --Booklist (starred review)

"An engrossing behind-the-scenes account of the fight to pass the Affordable Care Act in 2010... comprehensive and essential." --Publisher's Weekly (starred review)

"No one has reported more deeply about the quest for universal health care than Jonathan Cohn. Now, in The Ten Year War, he has woven all that knowledge into a sweeping, riveting narrative. Cohn never loses sight of the enormous human stakes involved and tells a much larger story about the fight to save American politics." -- DAVID GRANN, staff writer at The New Yorker, author of Killers of the Flower Moon

"A front row seat to the most important legislation passed in a generation, The Ten Year War brilliantly shares the roller coaster ups-and-downs. Just like its subject, this book is a Big Fucking Deal." -- MONA HANNA-ATTISHA, founder of the Flint Pediatric Public Health Initiative, author of What the Eyes Don't See: A Story of Crisis, Resistance, and Hope in an American City

“No legislative achievement has done more to shape the modern political era than the Affordable Care Act. Jonathan Cohn’s sweeping narrative of the decades-long struggle to reform America’s health care system—and of the sustained assault on Obamacare in the years after it became law—will go down as the definitive work on the definitive policy battle of the early 21st century.” -- TIM ALBERTA, chief political correspondent at Politico, author of American Carnage

"With its original reporting and vivid storytelling, The Ten Year War is essential reading for everybody who wants to heal our sick health care system -- and our sick political institutions too." -- ROBERT PUTNAM, professor at Harvard University, author of Bowling Alone and The Upswing

"In Jonathan Cohn's expert telling, the story of Obamacare emerges not only as a policy challenge for the ages, but a gripping narrative about the breakdown of American politics that helps explain how we as a nation ended up in this gridlocked, uncertain place.” -- SUSAN GLASSER, staff writer at The New Yorker, co-author of The Man Who Ran Washington

"The Affordable Care Act fight was the defining legislative battle of the modern era — the one in which the true nature of our institutions and parties came into sharp relief, the one in which the strategies and ideologies that dominate politics now were forged and formed. Jonathan Cohn covered it brilliantly, and now he’s written the authoritative account it deserves." -- EZRA KLEIN, founder and editor-at-large of Vox, author of Why We're Polarized

“This is a stunningly important book. Jonathan Cohn lays bare the tragedy of our health care system.” —Atul Gawande, author of Being Mortal

“No one has thought harder about our heath care system than Jonathan Cohn.” —E.J. Dionne, Jr., author of Code Red

"Sick is one of those rare books that combines the personal with the sharply analytical." —Buzz Bissinger, author of Friday Night Lights

“Sick is an eye-opening work on healthcare in America told through the stories of those in need.” —Jerome Groopman, author of The Anatomy of Hope