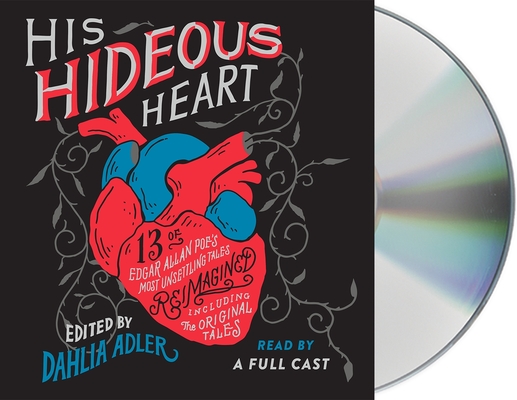 "His Hideous Heart is an audiobook dream. Half of the stories are read by their authors and the other half are read by professional narrators; all are delightful and, of course, haunting." -- Paste

Thirteen of YA’s most celebrated names reimagine Edgar Allan Poe’s most surprising, unsettling, and popular tales for a new generation.

Edgar Allan Poe may be a hundred and fifty years beyond this world, but the themes of his beloved works have much in common with modern young adult fiction. Whether the stories are familiar or discovered for the first time, listeners will revel in both Edgar Allan Poe's classic tales, and in the 13 unique and unforgettable ways that they've been brought to life.

Praise for His Hideous Heart:

"Narrated by a dizzying array of exceptional storytellers, these short stories have something for every listener...Recommended for listeners who can’t get enough Edgar Allan Poe or just need more thrilling audios in their listening queue." -- Booklist

"Adler’s anthology brims over with fierce delight and uncanny invention...if you haven’t read Poe before, 'His Hideous Heart' works equally well as an introduction, a tribute and a loving critique." -- The New York Times Book Review

Caitlin Davies is a New York City-based actor and audiobook narrator. Davies specializes in audiobooks for teens and young adults, including the House of Night series by P.C. Cast and Kristen Cast. She has performed in New York and regional theaters and is a member of the WorkShop Theater Company in New York City. She has a bachelor's degree from Vassar College, and has studied acting at the Eugene O'Neill National Institute, the British American Drama Academy, the Barrow Group, and Brown University/ Trinity Rep.

Caleb Roehrig is a former actor and television producer who cannot seem to live in one place. Currently dividing his time between Chicago and Helsinki, he is an expert at writing on planes and recovering from jet lag. His young adult titles include Teach the Torches to Burn: A Romeo & Juliet; the acclaimed thrillers Last Seen Leaving, White Rabbit, Death Prefers Blondes, and The Fell of Dark; and The Poison Pen—a tie-in to the CW’s popular Riverdale television series—and the Archie Horror original novel A Werewolf in Riverdale. His short stories have appeared in anthologies such as His Hideous Heart, Out Now, and Serendipity. Wherever he’s living at the moment, he’s there with his husband and an overabundance of books.

Fran Wilde's acclaimed short stories have appeared in Asimov's, Nature, and Beneath Ceaseless Skies. Aside from her writing career, she has worked as a science and engineering writer, as a programmer and game developer, as a sailing assistant, and as a jeweler's assistant. She lives in Pennsylvania with her family. She is the author of Updraft.

Robin Miles began her audiobook narration in 1994.  She's read over 130 titles covering many different genres and has won multiple Earphones awards.  Her many audiobook credits include Augusten Burroughs's Sellevision, Edwidge Danticat's Brother I'm Dying, and Lalita Tademy's Cane River.  Her film and television credits include The Last Days of Disco, Primary Colors, Law & Order: Criminal Intent, Law & Order, New York Undercover, National Geographic’s Tales from the Wild, All My Children, and One Life to Live.  She regularly gives seminars to members of SAG and AFTRA actors' unions, and in 2005 she started Narration Arts Workshop in New York City, offering audiobook recording classes and coaching.  She holds a B.A. in Theater Studies from Yale University, an MFA in acting from the Yale School of Drama, and a certificate from the British American Drama Academy in England.

TESSA GRATTON is the author of adult SFF titles The Queens of Innis Lear and Lady Hotspur from Tor Books, as well as the original fairy tales Strange Grace and Night Shine from McElderry Books. Her YA series and short stories have been translated into twenty-two languages. Though she has lived all over the world, she currently resides alongside the Kansas prairie with her wife.