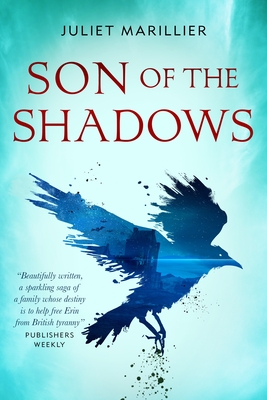 This is book number 2 in the The Sevenwaters Trilogy series.

Son of the Shadows is the sequel to Juliet Marillier's evocative first novel Daughter of the Forest. It continues the saga of beautiful Sorcha, the courageous young woman who risked all to save her family from a wicked curse and whose love shattered generations of hate and bridged two cultures.

It is from Sorcha's sacrifice that her brothers were brought home to Sevenwaters and her life has known much joy. But not all the brothers were able to escape the spell that transformed them into swans, and those who did were all more—and less—than they were before the change.

It is left to Sorcha's daughter Liadan who will take up the tale that the Sevenwaters clan is destined to fulfill. Beloved child, dutiful daughter, she embarks on a journey that opens her eyes to the wonders of the world around her...and shows her just how hard-won was the peace that she has known all her life.

Liadan will need all of her courage to help save her family, for there are forces far darker than anyone could have guessed and ancient powers conspiring to destroy this family's peace—and their world. And she will need the strength to stand up to those she loves best, for in the finding of her own true love, Liadan's course may doom them all...or be their salvation.

“Ever wondered what happens next in your favorite fairy tale? Juliet Marillier provides a beautifully wrought answer. . . . The exquisite poetry of the story is carefully balanced with strong characterizations and more than a nod to Irish mythology.” —Romantic Times