Daughter of the Forest: Book One of the Sevenwaters Trilogy (Paperback) 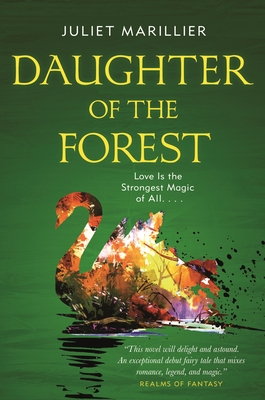 Daughter of the Forest: Book One of the Sevenwaters Trilogy (Paperback)

This is book number 1 in the The Sevenwaters Trilogy series.

Juliet Marillier brings us a beautifully re-imagined version of the Six Swans myth in Daughter of the Forest.

Lovely Sorcha is the seventh child and only daughter of Lord Colum of Sevenwaters. Bereft of a mother, she is comforted by her six brothers who love and protect her. Sorcha is the light in their lives, they are determined that she know only contentment.

But Sorcha's joy is shattered when her father is bewitched by his new wife, an evil enchantress who binds her brothers with a terrible spell, a spell which only Sorcha can lift--by staying silent. If she speaks before she completes the quest set to her by the Fair Folk and their queen, the Lady of the Forest, she will lose her brothers forever.

When Sorcha is kidnapped by the enemies of Sevenwaters and taken to a foreign land, she is torn between the desire to save her beloved brothers, and a love that comes only once. Sorcha despairs at ever being able to complete her task, but the magic of the Fair Folk knows no boundaries, and love is the strongest magic of them all...

Praise for Daughter of the Forest

“Marillier is a fine folklorist and a gifted narrator who has created a wholly appealing and powerful character.” —Publishers Weekly

“A nicely wrought and well-detailed historical fantasy, and an excellent first novel.” —Locus

“A world rich with magic and legend…Lush, poetic, and surprisingly romantic.” —Romantic Times

“What sets Marillier’s work apart is how she wraps this traditional plot with deeply individualized characters and a beautifully realized background of Ireland in the Dark Ages.” —VOYA

“The author's keen understanding of Celtic and early Irish Christianity adds texture to a rich and vibrant novel.” —Library Journal

“The story line is fast-paced, filled with action, and loaded with romance yet brimming with magical elements that seem real. The lead characters are warm, compassionate, and share a sense of family loyalty that adds to the adventure.” —Midwest Book Review

“A must-read for anyone who enjoys the power of myth.” —Charleston, SC Post & Courier