One Two Three: A Novel (Hardcover) 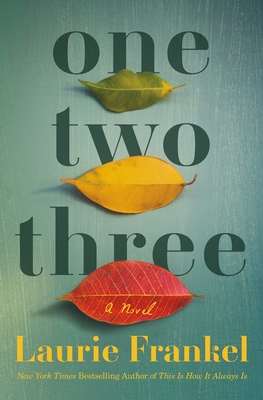 One Two Three: A Novel (Hardcover)

“I absolutely loved this heartwarming story of three courageous sisters fighting for justice in their town. It’s a modern David and Goliath tale of small-town America told with wit and heart. Frankel is a superb storyteller, and I did not want my time with this wise and endearing family to end.”
— Shannon Burgess, The Bookstore of Glen Ellyn, Glen Ellyn, IL

From Laurie Frankel, the New York Times bestselling author of This Is How It Always Is, a Reese's Book Club x Hello Sunshine Book Pick, comes One Two Three, a timely, topical novel about love and family that will make you laugh and cry...and laugh again.

In a town where nothing ever changes, suddenly everything does...

Everyone knows everyone in the tiny town of Bourne, but the Mitchell triplets are especially beloved. Mirabel is the smartest person anyone knows, and no one doubts it just because she can’t speak. Monday is the town’s purveyor of books now that the library’s closed—tell her the book you think you want, and she’ll pull the one you actually do from the microwave or her sock drawer. Mab’s job is hardest of all: get good grades, get into college, get out of Bourne.

For a few weeks seventeen years ago, Bourne was national news when its water turned green. The girls have come of age watching their mother’s endless fight for justice. But just when it seems life might go on the same forever, the first moving truck anyone’s seen in years pulls up and unloads new residents and old secrets. Soon, the Mitchell sisters are taking on a system stacked against them and uncovering mysteries buried longer than they’ve been alive. Because it's hard to let go of the past when the past won't let go of you.

Three unforgettable narrators join together here to tell a spellbinding story with wit, wonder, and deep affection. As she did in This Is How It Always Is, Laurie Frankel has written a laugh-out-loud-on-one-page-grab-a-tissue-the-next novel, as only she can, about how expanding our notions of normal makes the world a better place for everyone and how when days are darkest, it’s our daughters who will save us all.

Laurie Frankel is the New York Times bestselling, award-winning author of novels such as The Atlas of Love, Goodbye for Now, and the Reese’s Book Club x Hello Sunshine Book Pick This Is How It Always Is. Frankel lives in Seattle with her husband, daughter, and border collie. She makes good soup.

“Winning and amiable….The full and simple pleasures of Frankel’s luscious prose lull the reader into rooting for the good people of Bourne and these plucky heroines. After all, doesn't rooting for uncomplicated integrity feel good these days?”
—The New York Times

"Told through the voices of Mab, Monday and Mirabel it becomes richer, funnier and more poignant…their determination to fight for justice make this one of the summer’s freshest novels. One Two Three tells a more complicated story than its title implies, all the while reminding us that big changes can be made through small steps."
—Washington Post

"Laurie Frankel once again shows us just how talented a writer she is with her smart, funny, and timely novel...One Two Three is about community, family, love, and betrayal—a book with all the feels that took my breath away."
—Amazon Editors’ Pick

"A heartbreaking yet heartwarming novel of a town destroyed by chemical pollution and its fight for justice, led by an unforgettable family of heroines…All the way to a fast-paced and heroic climax, readers will be rooting for them."
—Shelf Awareness, Starred Review

"I’m not sure how any other audiobook will ever measure up as the perfectly cast narrators for each sister made this story such an incredible experience. I laughed and I cried and months later I’m still blown away."
—NetGalley

"Hilarious one moment, tear-jerking the next, this heartfelt book is a perfect listen for anyone passing through small towns with a unique story."
—Buzzfeed

“In Frankel’s tender-hearted latest…sharp plotting—with several surprising reversals—and memorable characters reflect a deep imagination that adds texture and complexity…. Readers will be captivated by this story of adversity and resilience.”
—Publishers Weekly

“Frankel has given us another socially conscious 21st-century fable in a voice that is part pastor, part political speechwriter, and part Fannie Flagg. Clever, charming, and always on message.”
—Kirkus Reviews

"One Two Three is a compelling story about environmental injustice and the people caring for each other in a small community. Reading Laurie Frankel’s books change how we look at each other and the world."
—BookTrib

"One Two Three is a summer read that is breezy and racks up surprising velocity, but it also leaves you with a sense of having discovered a way of looking at the natural world that you haven’t seen before."
—BookReporter

"Laurie Frankel has a magical ability to write books that not only make you think, but make you feel things deep in your gut."
—Glitter Guide

“I loved One Two Three from start to finish. What you always get with a Laurie Frankel novel is an engrossing plot—she’s a terrific storyteller—but for me the best part of any of her novels are the three-dimensional characters she’s created, characters for whom she has empathy and palpable affection, characters who seem to leap off the page and into the heart of the reader.”
—Nancy Pearl, author of the Book Lust series and George & Lizzie

“One Two Three is a powerful and nuanced novel about hope, human frailty, and love. Laurie Frankel takes a clear-eyed look at the mess we make of the world when we privilege profits over people and, brilliantly, without flinching from the truth, allows no hint of contempt, disgust, or hatred to enter the conversation. Three sisters, Mab, Monday, and Mirabel, understand that you can’t fight old problems with traditional tools. Their gifts and differences and love for each other help them to understand that their mother—our mothers—can’t make the change the world needs. It’s up to the daughters to act, to move us forward, to tell a different story. It is the daughters who will save us. One Two Three is the blueprint for a true revolution.”
—Nicola Griffith, author of Spear, Hild, and So Lucky

“In One Two Three, Laurie Frankel’s signature wit, warmth, and fierce compassion shine with the story of three courageous, memorable triplets. I loved this book from the first line to the last.”
—Marilyn Dahl, editor Shelf Awareness