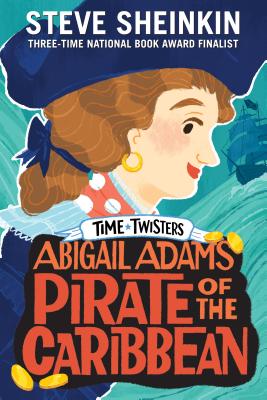 Abigail Adams, Pirate of the Caribbean, is a chapter book in the Time Twisters series by award-winning author Steve Sheinkin about what happens when a famous First Lady tires of life in the White House. Also check out Abraham Lincoln, Pro Wrestler!

Abraham Lincoln may have returned to history books, but other historical figures saw what he did—and now they know they can escape from their times, too. When Abigail Adams decides there’s more to life than doing chores in the White House, she joins a crew of Caribbean pirates! Can siblings Abby and Doc set history straight? Or will they be the ones who need to be rescued?

This title has Common Core Connections.

Steve Sheinkin is the acclaimed author of fast-paced, cinematic nonfiction histories, including Fallout, Undefeated, Born to Fly, The Port Chicago 50, and Bomb. His accolades include a Newbery Honor, three Boston Globe–Horn Book Awards, a Sibert Medal and Honor, and three National Book Award finalist honors. He lives in Saratoga Springs, New York, with his wife and two children. stevesheinkin.com

“A dash of history. A scoop of fun. Give this book to hungry readers everywhere!” —Jennifer L. Holm, New York Times–bestselling author of The Fourteenth Goldfish