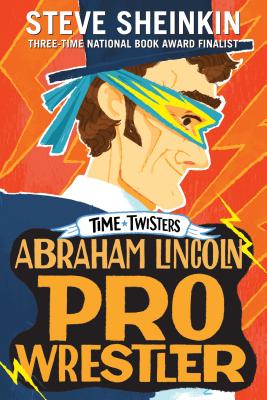 This is book number 1 in the Time Twisters series.

When Abraham Lincoln overhears a classroom of kids say “history is boring,” he decides to teach them a lesson. Lincoln escapes from 1860—to pursue his dream of becoming a professional wrestler! Now siblings Doc and Abby have to convince Lincoln to go back to Springfield, Illinois, and accept the presidency . . . before everything spins out of control!

Steve Sheinkin is the acclaimed author of fast-paced, cinematic nonfiction histories, including Fallout, Undefeated, Born to Fly, The Port Chicago 50, and Bomb. His accolades include a Newbery Honor, three Boston Globe–Horn Book Awards, a Sibert Medal and Honor, and three National Book Award finalist honors. He lives in Saratoga Springs, New York, with his wife and two children.

“[A] lively Abraham Lincoln–themed romp . . . The truth about historical figures, Sheinkin suggests, is more interesting than the myths, and Lincoln’s story concludes with hints about the historical mix-ups that will figure into subsequent books.” —Publishers Weekly

“Black-and-white line drawings reinforce the silliness of the story, while the short chapters will keep reluctant readers hooked. A fun way to entice students to embrace what might seem, at first glance, like boring history.” —School Library Journal

“A dash of history. A scoop of fun. Give this book to hungry readers everywhere!” —Jennifer L. Holm, New York Times–bestselling author of The Fourteenth Goldfish, on Abigail Adams, Pirate of the Caribbean