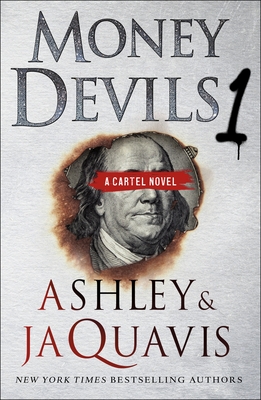 This is book number 8 in the The Cartel series.

From the New York Times bestselling authors of The Cartel series comes a new chapter in a world that only Ashley and JaQuavis know how to bring to life.

The LaCroixs are four beautiful Haitian American women bound by money and blood. On the surface, the LaCroix Group is a venture capitalist company, but underneath, it’s so much more. The four sisters run long cons, targeting wealthy, prominent business figures. They have a system: Find the perfect mark, create the problem, then present the solution. For a cost…

Sutton “Sutty” LaCroix, the eldest sister and an accomplished business maven, sits on the family throne as the CEO of the LaCroix Group and is the face of their operation. No one is as good as Sutton when it comes to finding new prey.

However, when Sutton meets West, a young, black oil tycoon—a man who represents a life she and her sisters vowed never to live—she breaks all the rules. The LaCroix sisters have a pact: to never settle down and leave roots in one place. But Sutton falls in love with West's good looks, charm, and old money. This means that West is a problem. When he inducts her into a high society of opulence, power, and generational wealth, Sutton finds herself torn between the love of her life and the love of her family.

Ashley & JaQuavis are New York Times bestselling authors of over 30 novels, including the Cartel series; the Luxe and Prada Plan series from Ashley Antoinette; and The Streets Have No King and The Stiletto Agreement from JaQuavis Coleman. They are the youngest black writers to ever debut on the prestigious New York Times list. Ashley Antoinette is a writer for the hit VH1 series Single Ladies, whiel JaQuavis Coleman is directing film projects for legendary rap artists, Prodigy and Scarface.