American Rebels: How the Hancock, Adams, and Quincy Families Fanned the Flames of Revolution (Hardcover) 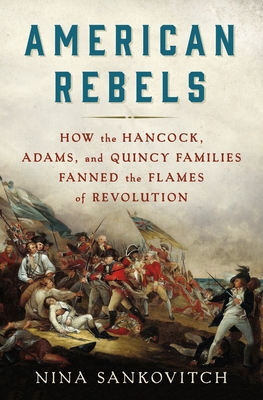 American Rebels: How the Hancock, Adams, and Quincy Families Fanned the Flames of Revolution (Hardcover)

Nina Sankovitch’s American Rebels explores, for the first time, the intertwined lives of the Hancock, Quincy, and Adams families, and the role each person played in sparking the American Revolution.

Before they were central figures in American history, John Hancock, John Adams, Josiah Quincy Junior, Abigail Smith Adams, and Dorothy Quincy Hancock had forged intimate connections during their childhood in Braintree, Massachusetts. Raised as loyal British subjects who quickly saw the need to rebel, their collaborations against the Crown and Parliament were formed years before the revolution and became stronger during the period of rising taxes and increasing British troop presence in Boston. Together, the families witnessed the horrors of the Boston Massacre, the Battles of Lexington and Concord, and Bunker Hill; the trials and tribulations of the Siege of Boston; meetings of the Continental Congress; transatlantic missions for peace and their abysmal failures; and the final steps that led to the signing of the Declaration of Independence.

American Rebels explores how the desire for independence cut across class lines, binding people together as well as dividing them—rebels versus loyalists—as they pursued commonly-held goals of opportunity, liberty, and stability. Nina Sankovitch's new book is a fresh history of our revolution that makes readers look more closely at Massachusetts and the small town of Braintree when they think about the story of America’s early years.

Nina Sankovitch is the author of several nonfiction books, including American Rebels and The Lowells of Massachusetts. She has written for the New York Times, the Huffington Post as a contributing blogger, and was formerly a judge for The Book of the Month Club. A graduate of Tufts University and Harvard Law School, Sankovitch grew up in Evanston, Illinois, and currently lives in Connecticut with her family.

“American Rebels is a fascinating and richly detailed story of three New England families who emerged from their small world to change ours forever.”
—James Comey, former FBI director and author of A Higher Loyalty

"Sankovitch lays out the evolution of eighteenth-century political thought and shows how it arose within these families and their interconnections. Students of American Revolution history will find a fresh perspective here."
—Booklist

"Sankovitch leavens her deeply researched account with wit, and presents a persuasive and entertaining portrait of life in colonial Boston. Revolutionary War buffs will savor this thoughtful addition to popular histories of the period."
—Publishers Weekly