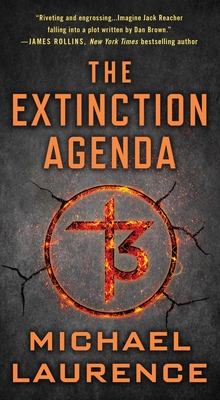 By Michael Laurence
$9.99
Available to Order - Usually Arrives in Our Store in 4 to 7 Days

An FBI agent fights to stop a conspiracy to unleash a deadly virus on the world in The Extinction Agenda, Michael Laurence's propulsive and exhilarating thriller.

The discovery of a deadly virus being smuggled across the border pits FBI Special Agent James Mason and his strike force against an unknown adversary hell-bent on humanity’s destruction. In a desperate effort to contain the pathogen, they launch a predawn raid, only to find that their enemy knows they’re coming…and it’s not about to be taken alive. An explosion rips through the building, killing the majority of Mason’s team, including his partner and mentor.

Unable to shake his survivor’s guilt, Mason can’t stop replaying the events of the tragedy. He remembers seeing something inside the building before it went up in flames that convinces him that the virus is still out there. Obsessed with unraveling the plot, Mason launches his own investigation and uncovers a man who’s been photographed at the epicenter of seemingly every historical pandemic—without appearing to age. A sinister being who attempts to derail Mason’s efforts by murdering his wife.

Now, driven by the promise of vengeance, Jason’s hunt for the enemy will lead him from a dark union at the dawn of the twentieth century to a network of Nazi collaborators to a deep-state entity known only as The Thirteen…before all hope for survival is lost.

Michael Laurence was born in Colorado Springs, Colorado to an engineer and a teacher, who kindled his passions for science and history. He studied biology and creative writing at the University of Colorado and holds multiple advanced certifications in medical imaging. Before becoming a full-time author, he worked as an x-ray/CT/MRI technologist and clinical instructor. He lives in suburban Denver with his wife, four children, and a couple of crazy Labrador Retrievers.

"An exciting page-turner that will keep a fan awake long past bedtime." —New York Journal of Books

"With a hero facing enough twists and turns to make James Bond look like a piker....A nail-biting thriller." —The Denver Post

"The mixture of science, history, and conspiracy echoes the work of James Rollins and Steve Berry. The pacing never lets up." —Booklist

"Think The X-Files by way of Michael Connelly...a refreshing switch from the usual, tried-and-true run-and-gun, non-stop action formula thrillers of this type tend to go for. Instead, The Extinction Agenda relies more on intelligently twisted machinations and a smart conspiracy that slowly unravels over the evolution of Mason’s investigation." —High Fever Books

"The character of James Mason joins all the other bad asses out there like Bond, Jason Bourne, Jack Ryan and Jack Reacher....The story is full of twists and turns and is non-stop action. I for one cannot wait for the next chapter with Mason and company." —Red Carpet Crash

“Michael Laurence’s The Extinction Agenda blew me away. Not only is the story riveting and engrossing, but imagine Jack Reacher falling into a plot written by Dan Brown, and you might get some hint at the rollercoaster of a ride found in this book. Don’t miss the start of what I hope will be a long series featuring Special Agent James Mason.” —James Rollins, New York Times bestselling author

"Michael Lawrence’s blistering debut, The Extinction Agenda, is an exciting, bold, and dynamic thriller! The stakes are impossibly high, the action and suspense is non-stop, and the characters are vibrant and memorable. Michael Lawrence is a new name to watch in the genre." —Mark Greaney #1 New York Times bestselling author of Mission Critical

"The Extinction Agenda is a pedal-to-the-floor thriller. Michael Laurence writes in the high-concept, high-action spirit of Crichton by way of Clancy but in a style all his own. Clean, crisp prose and a great visual eye make this one sizzle." —Michael Koryta, New York Times bestselling author

"If you love conspiracy theories (and who doesn't?), The Extinction Agenda revolves around a doozy. Michael Laurence has concocted a mind-bending thriller that chills to the bone because it's all too plausible." —F. Paul Wilson, New York Times bestselling author

"If Michael Crichton and Tom Clancy had collaborated on a globe-trotting thriller about a shadowy conspiracy the book would look like this. I can't wait to read more of James Mason's adventures, and I believe this series will have a long, entertaining run." —David Bell, USA Today bestselling author of Somebody's Daughter